Premiering on March 2, 2015, the show has been shot across locations in Paris, Banaras and Mumbai, and is directed by Oscar-nominated director Gyan Correa 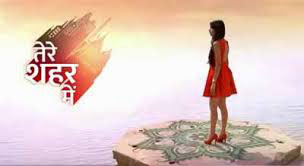 Premiering on March 2, 2015, the show has been shot across locations in Paris, Banaras and Mumbai, and is directed by Oscar-nominated director Gyan Correa

Star Plus has announced the launch of its new serial, ‘Tere Sheher Mein’, which will go on air from March 2. It is the story of the rich and affluent Mathurs and their three daughters. ‘Tere Sheher Mein’ will be aired every Monday to Saturday at 10 pm.

The protagonist, Amaya, shares a special bond with her father, who is her ‘Superman’ and she never has to struggle for anything that she wants. But life is no longer so smooth, when she comes face to face with an unexpected challenge and her life takes a 360 degree turn. She is forced to move from a comfortable life in Mumbai to Banaras and thus, begins the journey of her coming of age – from a pampered girl to becoming the support system for her family.

Commenting on the new serial, a Star Plus spokesperson said, “Our endeavour at Star Plus has always been to create strong characters like Sandhya, Ishita and Anjali, who work hard and follow through to achieve their dreams. ‘Tere Sheher Mein’s Amaya is one such inspirational character. We are happy to associate with Rajan Shahi once again, who we have partnered to create successful shows such as ‘Bidaai’ and ‘Yeh Rishta Kya Kehlata Hain’.”

Rajan Shahi, Producer, Directors Kut, added here, “I am extremely happy and proud to be working with the No. 1 platform, Star Plus, once again and hope that this fruitful association goes a long way ahead. ‘Tere Sheher Mein’ has been shot on a grand scale across locations in Paris, Banaras and Mumbai and has been directed by Oscar-nominated director Gyan Correa, who brings an altogether new approach and perspective to the show. The ensemble cast of Gautami Kapoor, Sachin Tyagi and Hiba Nawab bring out the essence of the characters.”