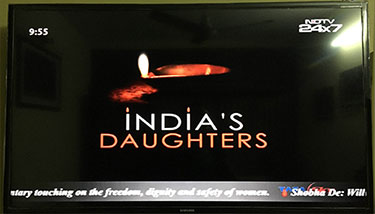 A flickering lamp and the words, ‘India’s Daughters’, greeted viewers who tuned in to NDTV between 9 pm and 10 pm on Sunday, March 8, 2015. It was the designated hour that the channel had slotted to air Leslee Udwin’s powerful and disturbing documentary, ‘India’s Daughter’, before the Government decided to halt its broadcast.

The ticker at the bottom of the screen carried the comments of well-known personalities and Indians in general on the ban on the documentary as well as the issues raised in the documentary.

Instead of issuing any statement on NDTV’s unique way of protesting the ban, Vikram Chandra (@vikramchandra), Executive Director and Group CEO, NDTV Group, tweeted: “You don’t have to shout to be heard. Sometime, silence can speak too.”

NDTV’s silent protest led to an explosion of comments on social media, with nearly all praising the channel’s dignified response to the Government ban on the documentary.

Best Media Info got in touch with some leading editors of the country to find out what they thought about NDTV’s blank screen protest. Here’s what they had to say...

“It is without doubt the finest moment in Indian television history. NDTV couldn’t have chosen a more eloquent and compelling form of protest. It managed to observe the ban, stayed within the ambit of the ban and yet exposed the utter stupidity of the ban. I cannot recall another instance of protest of such nature in the world. I went through the entire hour looking at the blank screen and didn’t switch channels. If I have to sum it up in one word, I would call it Indian television’s finest Gandhian moment.”

Karan Thapar, television commentator and anchor of Headlines Today programme, ‘To The Point’:

“NDTV’s silent protest against the banning of the BBC documentary on Nirbhaya was imaginative, powerful and laudable. Without saying a single word, it struck an instant chord and immediately communicated its core message. A thousand sentences would not have had the same effect.”

“Silence speaks so much louder than words. Particularly in a TV scene, where we all shout so much needlessly.”

“I fully support the stand taken by NDTV. Censorship of this documentary is a dark moment for the media, and a blank screen is a powerful and symbolic protest.”

Sardesai (@sardesairajdeep) also tweeted: “When media looks to censor other media, then we know we are in trouble. Will watch #IndiasDaughter on the net tonight. In solidarity.”

“NDTV’s blank screen protest was eloquent silence that spoke volumes. It also threw light on how media is shaping up today. It was a unique protest never seen before on television. I am thankful to NDTV for supporting us and am overwhelmed by the gesture. The entire ban incident has also exposed what technology has done and how it has empowered the people. The Government needs to think that when technology is in people’s hands do such bans really matter and have any significance. People could access the documentary on platforms other than television. Also, media needs to introspect as to how far it will go for TRPs. There is also need to debate are we the kind of society that introspects and can take on criticism.”

Nikhil Wagle (@waglenikhil) wrote: “This is the most effective protest in the history of Indian news tv. Solidarity #Ndtv.”

Tavleen Singh (@tavleen_singh) commented: “Well done NDTV for protesting so meaningfully against the ban on India's Daughter: a blank hour to register censorship.”

Omar Abdullah (@abdullah_omar) wrote: “Well done to @ndtv for protesting the ban imposed on #IndiasDaughter without resorting to noise & shrill voices. I hope the ban is lifted.”

Then there were those who brought in a little amount of mirth to the comments.

Samit Basu (@samitbasu) tweeted: “I think the @ndtv screen right now shows there is a dignified response possible to this new Emergency.” “Waiting for Arnab’s Solid Wall Of Noise response to the NDTV protest.”

Last week, the Government had issued an advisory to all television channels asking them to not telecast the documentary on the brutal Nirbhaya gangrape. The documentary, ‘India’s Daughter’, was to be aired on NDTV on International Women’s Day. BBC brought forward the telecast date for the documentary and aired it in the UK on March 4.

Protesting the ban, Shobhaa De had written two columns that appeared in NDTV.com (‘India’s Daughter banned? It should be compulsory viewing’) and Mumbai Mirror (‘I am ‘India’s Daughter’, too!’)

De (@DeShobhaa) had also tweeted: “Once again India needed the BBC to break the horrible truth about our deplorable attitude to women and rape.” “Ban the lawyers interviewed in the banned Nirbhaya documentary, for starters. Revoke their licenses. That would be meaningful intervention.”

The Editors Guild of India also appealed to the Government to revoke the ban and in a statement issued said, “The Government of India’s move in banning the telecast of the BBC documentary ‘India’s Daughter’ depicting the aftermath of the brutal gangrape and murder of Nirbhaya is wholly unwarranted, based as it is on a misunderstanding of the power and the message behind it.”

Ironically, the documentary could be viewed on YouTube till a day ago before it was taken off air. This reporter saw the entire documentary on YouTube in the early hours of March 7, 2015.