Goafest 2015: First set of speakers announced for this year’s event

For the first time Youth Labs, with separate Creative Lab and Media Lab, have been introduced 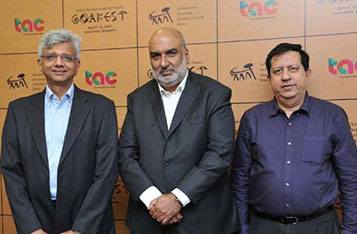 Goafest 2015: First set of speakers announced for this year’s event

For the first time Youth Labs, with separate Creative Lab and Media Lab, have been introduced for young attendees

Organisers of Goafest 2015 have announced the schedule as well as the first set of speakers for the Knowledge Seminars at this year’s event. Scheduled from April 9 to 11 at The Grand Hyatt, Bambolim in Goa, the 10th edition of the festival will host awards nights on all the three nights. While the Advertising Conclave will be held on the first day, the Knowledge Seminars will be held on the following two days.

Additionally, there will be a Leadership Summit on April 11, which will bring together best minds in the field of advertising, communications and marketing industry to discuss, debate, interact, offer thoughts and experiences, share ideas and questions on the industry.

Nakul Chopra, Chairman of Goafest 2015 and Vice President of Advertising Agencies Association of India (AAAI), said, “It is our endeavour to make Goafest 2015 better and superior. The announced programmes will be augmented with a series of presentations from leaders in their respective fields and panel debates.”

“We are also introducing for the first time Youth Labs for young delegates. These Youth Labs will have a separate Creative Lab and Media Lab. The aim of these Youth Labs will be to provide a platform for youngsters to interact with stalwarts in the industry and get them to sharpen and hone their skills,” revealed Chopra.

MG Parameswaran, President, AAAI, added here, “Goafest 2015 will have a great mix of speakers this year. Our effort is get the 2,500+ participants to listen to and interact with the best, the world has to offer. As in the previous years, we will have stimulating Q&A sessions moderated by senior marketing professionals.”? Goafest 2014 had recorded 1,705 delegates from 245 different organisations.

This is the eighth year that AAAI and The Advertising Club will be coming together for the Abbys, the awards that ‘celebrate creativity’.

In a statement issued by the organising committee, Pratap Bose, President of The Advertising Club and Chairman of The Awards Governing Council (AGC), stated, “The initiatives introduced last year were widely appreciated by all the stakeholders. We will continue to follow the stringent and now well accepted norms for the Abbys. An exciting feature that we have introduced this year is that the campaigns that have been released till February 15, 2015, are now allowed to submit their entries at this year’s Abbys.”

Continuing with the changes that were inducted in 2012, this year’s awards too will include a Grand Prix for Film, Print, Radio, Outdoor, Design, Interactive Digital, Direct, Media and Integrated. This year, too, there will be a window of 10 days before the final judging round. During this window, shortlisted entries will be available for the entire industry to review. However, Abbys once awarded will stay awarded. The special ‘Rest of South Asia’ awards will continue to be held to encourage participation from other SAARC countries.

The Award shows for various verticals will be held on the following evenings:

Organisers informed that Goafest has been witnessing growing participation from clients with over 50 client organisations represented at Goafest last year. Marketing Wizards, an initiative under which young clients (members of Indian Society of Advertisers) can avail of the special under 30 delegate fees as well free accommodation, will continue this year.