FICCI Frames 2015 to focus on making India the entertainment superpower

FICCI Frames 2015 to focus on making India the entertainment superpower

FICCI is all set to organise its annual media and entertainment business convention, Frames, from March 25 to 27, 2015 in Mumbai. Arun Jaitley, Union Minister of Finance, Corporate Affairs, and Information and Broadcasting Minister, is scheduled to give the inaugural address at FICCI Frames 2015, while Maharashtra Chief Minister Devendra Fadnavis is also expected to deliver an address on the occasion. Prasar Bharati Chairman Surya Prakash and Uday Shankar, Chairman, FICCI Entertainment Committee and CEO, Star India, are also scheduled to share their views on the industry as part of the inaugural address.

Some of the highlights from day one include Ryan Kavanaugh, CEO, Relativity’s keynote on ‘Make in India: A Revolutionary New Model for Hollywood and Bollywood’, followed by a session moderated by Uday Shankar, titled ‘Vision 2020 – laying a transformative roadmap for Indian Broadcasting’. Punit Goenka, CEO, Zee Entertainment Enterprises will present a keynote on ‘The Winners & the Players: Strategies to differentiate in content and capture audiences’. As is the norm, the FICCI BAF Awards are scheduled for the first night of the event.

While day two of the event will continue its focus on the media and entertainment space, day three will exclusively focus on the emerging digital medium. A session titled ‘An Enabling Tax Regime for the M&E Sector’ is expected to feature Shaktikanta Das, Secretary, Revenue, Government of India and a KPMG Presentation by ED Himanshu Parekh. The day will also see the launch of FICCI Women in Media Forum, which is expected to be a platform for an exchange of knowledge and ideas between women in media, both nationally and internationally, and will aim to represent women to relevant policy-makers on issues pertaining to employment terms and practices in the media and entertainment sector. The day will also bring to the table the often debated digital versus print topic. Another session to watch out for will be the one about emergence of big sports leagues in India.

On the final day of the event, Raghav Bahl will begin the day with a talk centred around ‘Being an M&E entrepreneur in India’. Union Minister for Communications and Information Technology, Ravi Shankar Prasad, is expected to deliver a keynote address on ‘Regulatory Challenges towards Enabling Digital India’. A session on ‘live events’ and ‘Brand Building and Engagement in a Digital World’ are also part of the schedule. Bringing down the curtains on this year’s event, Col Rajyavardhan Singh Rathore, Minister of State for I&B, will present a valedictory address on ‘Making India the Entertainment Superpower: Innovating for an entertainment ecosystem’. 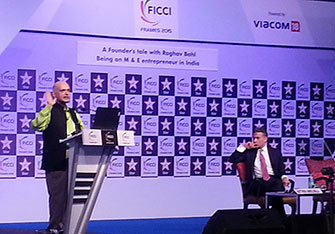 Smartphone has revolutionised the media ecosystem: The Quint’s Raghav Bahl 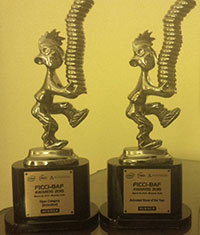