JWT, through this campaign, talks about the various sticky situations which come between the game of Cricket World Cup and the ardent fans 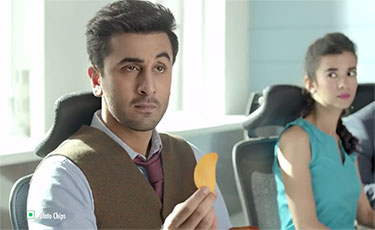 JWT, through this campaign, talks about the various sticky situations which come between the game of Cricket World Cup and the ardent fans

Lay’s has come out with its second TVC from the campaign, ‘Yeh Game Hain...Taste Ka’, around the ICC World Cup 2015. As the tournament is being held in Australia and New Zealand this time, there is a time mismatch for cricket lovers in India.

JWT, through this campaign, talks about the various sticky situations which come between the game of Cricket World Cup and the ardent fans. Lisa Hayden and Ranbir Kapoor play the mismatched players in the game of fun versus stern. While Ranbir plays the goofy, carefree and smart employee, who is an ardent cricket lover, Lisa plays the role of the strict boss insisting on a mundane boardroom meeting. In this tussle of the meeting versus the match, Ranbir manages to effortlessly hypnotise the boss with a ‘Wristy Flick’ of the irresistible Lay’s chip to get out of the meeting and enjoy the match with his colleagues.

Babita Barua, Senior Vice President, JWT, said “The film, part of the Lay’s World Cup Cricket campaign, shows the use of ‘cricket lingo’ in a fun, smart way with the irresistibility of Lay’s to get out of sticky situations and catch the live telecast. The chemistry between Ranbir and Lisa, in her role as the strict boss, is something to watch out for.”

Speaking about the ad film, Rajiv Mathrani, Director & Category Marketing Head – Snacks, PepsiCo India, commented, “The campaign is all about the great taste of Lay’s coming together with the love for cricket that will help you get away from sticky situations and watch the match. This film, set in an office meeting, brings out a very relatable situation that many people are sure to experience. It would be interesting to watch Ranbir mesmerise Lisa, the boss, with a ‘Wristy Flick’ of the delicious Lay’s chip, to catch the match.”