India TV’s Rajat Sharma has been chosen for Padma Bhushan while McCann Worldgroup’s Prasoon Joshi will get Padma Shri. Senior journalist and columnist Swapan Dasgupta was also chosen for a Padma Bhushan 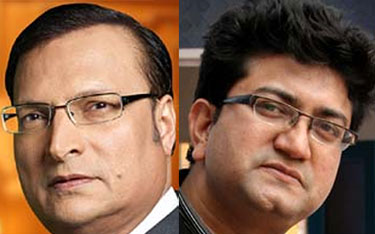 India TV’s Rajat Sharma has been chosen for Padma Bhushan while McCann Worldgroup’s Prasoon Joshi will get Padma Shri. Senior journalist and columnist Swapan Dasgupta was also chosen for a Padma Bhushan

On the eve of 66th Republic Day, Rajat Sharma, Chairman and Editor-in-Chief of India TV, and columnist Swapan Dasgupta were chosen for Padma Bhushan for their contribution in the field of Literature and Education. Prasoon Joshi, Chairman, Asia Pacific, CEO & Chief Creative Officer, McCann Worldgroup India, was named for Padma Shri for his contribution in the field of Art.

Prasoon Joshi, besides being one of India’s best-known ad professionals, is also a writer, poet, lyricist, screenwriter. He has won the Filmfare Best Lyricist Award three times, twice consecutively, in 2007 and 2008 and again in 2014 for Bhaag Milkha Bhaag. Joshi has also received the National Film Award for Best Lyrics twice, once for his work in Taare Zameen Par (2007), and Chittagong (2013).

Joshi said in a statement, “When years of hard work get recognised, especially by the government, one feels humbled and motivated. Amongst my other awards, this honour is the most special because it would mean a lot to my parents and elders in the family and make them happy. I want to thank our government and the committee who thought my work as a writer in the field of poetry cinema and communication is worthy of this prestigious recognition." Joshi had written the lyrics for Prime Minister Narendra Modi's anthem for ‘Swachh Bharat Abhiyan’ last year.

Rajat Sharma said in a statement, "I never think about awards. My biggest award has been the love and affection I get from my viewers, their faith in me. And that's why, on being conferred this Padma Bhushan award, I feel very humbled, I think it is for my viewers. I dedicate this award to my viewers. It is their love, their affection, their trust which has brought me where I am. It actually belongs to them."

The Padma awards, one of the highest civilian awards of the country, are conferred in three categories, namely, Padma Vibhushan, Padma Bhushan and Padma Shri. The awards are conferred by the President at a ceremonial function held at Rashtrapati Bhawan usually around March/April every year. This year the President has approved conferment of Padma awards to 104 persons. The list comprises nine Padma Vibhushan, 20 Padma Bhushan and 75 Padma Shri Awardees. Seventeen awardees are women and the list also includes 17 persons from the category of foreigners, NRIs and PIOs, and four posthumous awardees.