Other than the new faces of Vijender Singh, Karan Kundra and Esha Deol as judges, this time, there are several format breakers 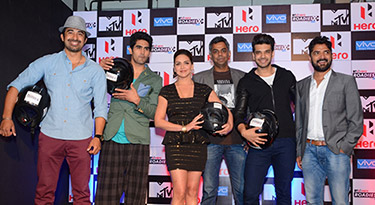 Other than the new faces of Vijender Singh, Karan Kundra and Esha Deol as judges, this time, there are several format breakers

MTV Hero Roadies is back with its twelfth season (X2) and with three new faces- Vijender Singh, Karan Kundra and Esha Deol, along with the original roadie Rannvijay Singh. The show will premiere on January 24 and will be aired every Saturday at 7 PM. It will be a 17 episode show.

Raghu and Rajiv fans, who gave Roadies the brand identity, are not on board for the first time in 12 years Commenting on how tough was it to go ahead with the show sans them, Aditya Swamy, EVP and Business Head, MTV India said, “All good things have to move on, Raghu and Rajiv gave Roadies the name, but as content creators our work is to challenge everything and keep moving. Whenever we have changed any format, we have always noticed a spike in viewership and this time, there are several format breakers.”

He further added, “It’s the 12th season and yet it feels like the first. The excitement of the fans at the auditions is contagious and this drives us to make every season the very best. This year we are breaking the format wide open and if there is one thing the Roadies fan expects, it’s the unexpected. With our four super cool gang leaders, Rannvijay, Vijender, Karan and Esha leading from the very front, Roadies X2 is going to be a brand new experience with 4 times the madness this time.”

For the first time in the history of Roadies; there is a female judge to represent the girl power and the judges will be seen competing against each other. They travelled to Pune, Kolkata, Delhi and Chandigarh to audition the Roadies enthusiasts for their respective gangs. Each gang leader was on the look-out for something truly unique for his or her gang. While Rannvijay looked for people with ‘discipline’, Vijender was on the lookout for people who were all ‘heart’. Karan’s focus was on grabbing the best ‘strategists’ while Esha was clear on what she wanted – people with their ‘eye on the prize’. Each leader chose several people from each city for their respective gangs which were then sorted down to five people per gang. The Roadies X2 journey which begins in early February will see all the four gang leaders riding with their four team members each from Varanasi to Nepal.

Discussing the marketing plans, Swamy highlighted, “Roadies is our tent pole and we are doing several interesting activities this time; out of which we will be going to campuses and promoting the event. The tremendous support from Bollywood will also help us to spread it through the word of mouth. Our own social media account and the power of our network are always there to back this property.” Hero MotoCorp as the title sponsor and the powered by partner is Vivo Smart Phone.