The touching four-minute-long video, conceptualised by Linen Lintas, highlights how genuine support from family and friends can help a cancer survivor gain strength to reclaim her life 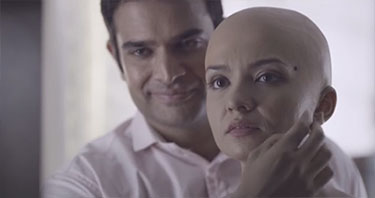 The touching four-minute-long video, conceptualised by Linen Lintas, highlights how genuine support from family and friends can help a cancer survivor gain strength to reclaim her life

Many believe that the beauty of a woman lies in her lustrous mane. But, what if she loses her hair to cancer one day? She won’t stop looking beautiful, is what Dabur Vatika says in its latest emotional digital campaign ‘Brave and Beautiful’. It’s not often that a hair care brand chooses to take the social route in its communication. The four-minute long film salutes the inner strength of those women who have battled cancer and have come out as the winner.

The campaign conceptualised by Linen Lintas highlights the message that ‘some people don’t need hair to look beautiful’. It traverses the journey of one such survivor and propagates how prompt and genuine support from family and friends can help the survivor gain strength to battle all odds. Jaideep Mahajan, ECD, Linen Lintas, said, “The campaign is path-breaking in the sense that, for the first time a brand is talking not about the ordeal of cancer, but about the reboot of life post that. It’s not about one’s fight with the disease but with yourself when you have already defeated your biggest enemy. The biggest connect between the brand and the cause is ‘hair’, or actually the absence of them. ‘#Brave and Beautiful’ aptly captures the core thought of the campaign and does the task of getting the brand and the cause on the same platform.”

The short film shows a young mother – a cancer survivor who is trying to get her life back on track against trying circumstances. Not an easy thing to achieve, given that she has lost all her hair on account of the gruelling chemotherapy sessions and medicines that have taken a toll on her health. The video opens with the bald woman looking at a family picture in which she once stood happily with her husband. The picture shows her flaunting long, lovely hair and then the camera gradually goes down to show her hands, which have become frail with several needle marks on her wrist. She puts off the morning alarm and then goes on to get her daughter ready for her school. The film captures the love and support her family gives her, giving her strength to move on.

As she gets ready for a new day in office, the hesitation, fear and embarrassment is reflected on her face, but her husband comes and assures her that she is a woman of steel. While she gets dressed up and is about to put the black bindi on her forehead, her husband puts it on the side of her head, as a ‘kala tika’ – to protect her from evil glances, since she looks so beautiful. On reaching office, she is pleased to see all her colleagues excited to see her after such a long time. They too take off their bindis and place it on the side of her head. Almost instantly, she settles into her professional work life with the belief that her friends and society will accept her in whatever form, as she has emerged a true ‘survivor’. The film ends with the beautiful message that ‘some people don’t need hair to look beautiful’.

The song in the background, ‘Tu faulad, Tu phool’, sung by singer and composer Salim Merchant with music directed by Haneef and lyrics written by Pranav Harihar, beautifully compliments the story.

Praveen Jaipuriar, Marketing Head, Personal Care, Dabur India, said, “As a natural hair care expert, Vatika seeks to salute the inner strength and beauty of those women who have fought and defeated cancer, and have resumed normal life again. The campaign begins with an engaging note - ‘some people don't need hair to look beautiful’. Vatika, as a brand, has always stood for ‘woman of substance’. Who else could be more ‘brave and beautiful’ than a woman who has defeated this dreaded disease and embraced life?”

He further added, “Brands have always talked about how hair makes a woman beautiful. Most brands talk about hair fashion, style, strength etc. But the hard fact is that a lot of women, who have undergone chemotherapy, do not just lose hair but end up with erosion in self-esteem. It takes a great deal of confidence and inner strength to face the world all over again. This campaign seeks to identify and present stories of such brave women who can inspire millions more who are fighting this dreadful disease today. It conveys that ‘beauty is not skin deep’. This is just the beginning and you will see many more legs to this campaign, going forward.”

Cancer is one of the leading causes of deaths in the world. According to estimates, there are nearly three million patients suffering from the disease in India. According to numbers available from World Health Organisation, about 500,000 people die of cancer annually in the country and that number is expected to rise by 40 per cent in 2015.

Saurabh Dasgupta, Executive Creative Director, Innocean, simply loved the film. He said, “Since I was part of the Vatika team for more than eight years, it gives me great pleasure to see how the brand has evolved to such heights of beauty and maturity. Till now we have seen brands only talking about hair, its efficacies and problems, but Dabur, in this latest campaign, has achieved the peak of innovation. Even though I am no longer associated with the brand, but it gives me a sense of fulfilment to see how this campaign moves you and the beautiful brand connect it makes.”

According to Chaitanya Joshi, Creative Partner (Copy), Creativeland Asia, the beauty of this film’s story lies in its simplicity. “Though a bit long, the film has its moments that keep you engaged. It has oodles of positivity, with no unnecessary negative characters or instances, just to prove a point. Thus, it surely succeeds in inspiring, than being just a tearjerker. Overall, the film is brave and beautiful,” he stated.

Echoing similar views, Joybrato Dutta, Creative Group Head, Scarecrow Communications, said, “A beautiful film with a beautiful message. Indeed a brave message by a hair care brand. The message 'beauty being skin deep' has been brought out really well. However, one would expect a four-minute long film to be more impactful or at least end on a high. The emotional quotient of the film was pretty much the same throughout. Probably ending the film on a higher emotional level would have made it more impactful. Nevertheless, it's a beautiful film.”