The channel’s new signature tune has been created by Brand Musiq, and reflects the different moods of the common people 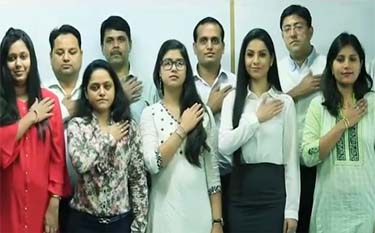 The channel’s new signature tune has been created by Brand Musiq, and reflects the different moods of the common people

Click on the image to listen to the Zee News Signature Tune.

Zee News has unveiled its signature tune developed by Brand Musiq, a company formed by two seasoned ad men – Rajeev Raja and Manithat – which brings music and brands together, in the relatively new field of ‘sonic branding’.

Talking about the objective behind the signature tune, Ashish Pandit, CEO, Zee Media, said, “In a cluttered news category where content is a given and dynamic too, channels have a real challenge to differentiate and stand out. Being an audio-visual programme, one may not necessarily watch the news always, but could always be tuned in by hearing what’s happening. This is where the ‘sonic identity’ of a channel can create an emotional bonding with the viewers.”

Pandit describing the new signature tune, said, “The Mogoscape, the musical logo of Zee News, first captures the essence of the brand as the ‘People’s Hero’, and also the essence of news, which is essentially everything that happens around us. So, the Mogoscape has sounds of daily life of a city and town that has a certain buzz and urgency. Within this is the voice of the ‘people’s channel’, a voice that blends with the ambient and calls you to pay attention to what’s happening around you, because ultimately news is about what impacts everyone. The Mogo which is the ‘sonic identity’ of the channel has that sense of urgency and is like a clarion call. The Mogo and strains of the Mogoscape will be present in all the program tracks that will help bind all that the channel does, and present it in one unique voice.”

When asked about the need for this new signature tune, Pandit said, “We are the oldest and largest news organisation in India. We are youthful, aspirational and we are the leaders. So we wanted to communicate that the word ‘hero’ is somewhat similar to Zee News today. The tone actually stands for your entity. So, from the perspective of brand positioning, we are very clear about the fact we are the hero, as a hero is someone who takes up the rights of the common people. Being the market leader, we wanted to differentiate from others.”

Rohit Kumar, VP, Marketing, ZMCL, said, “We want to communicate that we are the hero as well as regular. We are hero for the common men because the channel smiles with the people, cries for the people and celebrates the success of the country. The signature tune actually captures the moods of the viewers. And, of course, we have a standard tune which goes before headlines, but this one is not the standard one.”

The channel is promoting its signature tune on TV, and will also run a few print ads. It will also be available to download on mobile phones.