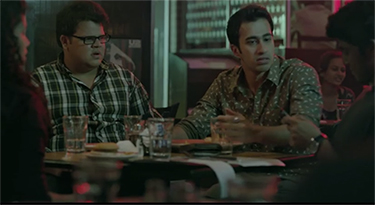 The first TVC starts with a few youngsters having a good time at a restaurant. When it is time to pay, one of them, who is probably treating everyone else, says that he has forgotten his debit card pin number. On hearing this, his friends get tensed as none of them has money to foot the bill. The guy asks them to chill and say a few random numbers, using which he creates a pin for his debit card, right then and there. He pays the bill using his card and changes his pin again.

The TVC for ‘Mail Money’ shows a young girl searching for a book in a library. She finally finds it but puts it back as it is too expensive. In another frame, an old man is seen sending money to the girl in an envelope. As she browses through the books, she comes across the envelope with the money she needs to buy the book. Overjoyed she picks up the book to purchase it, as the voice-over says, ‘Bhejo thodi khushiyaan kisi ke inbox mein.’

D Ramakrishna, Founder, Cartwheel, said, “Banking has always been seen as a chore and bank ads have always tried to remind us that it need not be. So, at the risk of crying wolf, it needs to be said that this new crop of products from Kotak does take ease to a whole new level. For instance, losing a pin number is usually a cause for panic. But, the character in the ‘Instant Pin’ film is so chilled about losing his pin, he turns it into some kind of magic act. Then, there is the mail money film, where we wanted to emphasise the incredible simplicity of sending money using something as basic as email. Here, we also wanted to emphasise that, ultimately, money's real power lies in its ability to get us the things we love.”

Ramakrishna further said, “In an upcoming film, we introduce an even newer concept that we are calling ‘hashtag banking’. There was also radio, outdoor and print highlighting each of these new products. Another factor was that Kotak is young as banks go, and the imagery needed to reflect that fact. Showing youngsters in a category where the young hardly ever gets featured, is already clutter-breaking. This was a great opportunity to create a banking campaign that did not feel like one, and we do believe we are well on our way.”