Gems says ‘no umar for superheroes’

Created jointly by Ogilvy and Eeksaurus, the brand’s latest campaign explores the dream of owning the exclusive range of Justice League Superhero collectibles 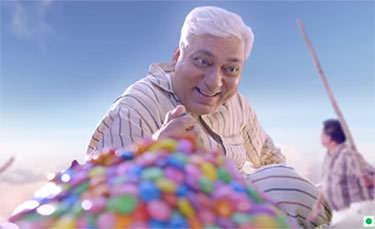 Gems says ‘no umar for superheroes’

Created jointly by Ogilvy and Eeksaurus, the brand’s latest campaign explores the dream of owning the exclusive range of Justice League Superhero collectibles

Gems has launched a campaign under its ‘Raho Umarless’ theme, created by Ogilvy and Eeksaurus, to explore the dream of owning the new range of Justice League Superhero collectibles.

The TVC shows an old man in pyjamas cruising in the clouds. He reaches the wonderland of Gems, where there are several boats filled with Gems. He pops a handful in his mouth and sees the Justice League Superhero collectibles - Superman, Batman, Wonder Woman, among others, appear in front of him. But before he can have them, another man grabs them and sends him off flying. The old man wakes up panicked, only to realise that it is a bad dream. He keeps his collectibles close to him and goes back to sleep. The TVC ends with the voiceover that says, ‘No Umar For Superheroes’.

Neville Shah, Group Creative Director, Ogilvy & Mather Mumbai, said, “Working on this film was special. It involved a simple story but a complicated shoot plan. In a complicated shoot plan, it is always a challenge to stay focussed on the story. Having said that, the final outcome of this film is beautiful, making it appear absolutely effortless, keeping the simplicity of the story intact. Credit goes to Suresh and the Ogilvy team - Ashish Naik, Vipul Indulkar, Nikhil George and others in Ogilvy and Cadbury who contributed."

Suresh Eriyat, Founder and Creative Director, Eeksaurus, said, “It was a pleasure working with the entire time of Gems the second time around, the last being during IPL 2013.While the main protagonists are already a hit among the consumers, the task at hand was also to ensure that the product looks exciting, and not just a part of the background. We were able to blend Gems in perfectly, through the whole dream sequence, and make it not only visually appealing, but also fit in well with the aesthetics by adding an authentic Indian touch through the use of the boatmen.”