Brand ambassador Ranveer Singh encourages people through a print ad and video to not hesitate to talk about sex openly. The creative execution has been handled by Creativeland Asia 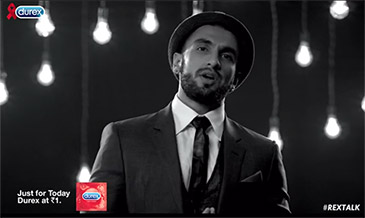 Brand ambassador Ranveer Singh encourages people through a print ad and video to not hesitate to talk about sex openly. Durex has roped in MTV for the campaign to reach out to the youth. The creative execution has been handled by Creativeland Asia

Readers of The Times of India yesterday were greeted early morning with a two-page front cover ad (refer to the ads below) by condom brand Durex. The grey ad featured brand ambassador Ranveer Singh proclaiming the theme ‘Protect yourself from bad news’ on the first page, and on page 2 he said ‘Make love without fear.’ At the bottom of the page it was mentioned that the campaign is a public interest initiative on World AIDS Day, and Durex will be selling condoms for Re 1 on the occasion through Flipkart and Snapdeal. The creative execution was handled by Creativeland Asia.

Durex has also partnered with MTV to push the ‘Rex Talk’ campaign among the youth. The 360-degree integrated campaign aims to promote safe sex by using condoms and also encouraging people to talk freely about sex.

Before the current campaign, MTV and Durex had made the nation groove to #DoTheRex last year with Ranveer Singh. This time too, Ranveer encourages the youth to break the silence and engage in open conversation around safe sex in ‘Durex MTV Rex Talk’ campaign.

Sajan Raj Kurup, Founder & Creative Chairman, Creativeland Asia, said, “We are excited to partner Durex in this new strategic direction of encouraging the youth to engage in open conversations around safe sex. What better way to start than to take over the front page of newspapers and news portals with a powerful message of protecting oneself against bad news.”

Nitish Kapoor, Managing Director, RB India, which makes Durex condoms, said, “As a global category leader, Durex is passionate about sexual wellbeing and understands the importance of connecting with the youth. Through ‘Rex Talk, we aim to encourage the youth to engage in open conversation around safe sex and raise awareness around the subject by demystifying the stigma attached to it. We have partnered with MTV for this initiative as both Durex and MTV are iconic youth brands and will help us reach out to the right audience.”

Ranveer Singh said, “After #DoTheRex, the highly impactful first phase of our association, I’m happy to reunite with my favourite condom brand Durex to present 'Rex Talk'. Together with Durex I'd like to take an initiative urging young people to bring sex out of the closet. As the brand ambassador of the world’s leading condom brand it is my duty to encourage and remind lovers to use protection and make love without fear."

Aditya Swamy, EVP, Viacom 18 and Business Head of MTV, said, “I think MTV always had a bold stand on youth issues. The last campaign what we did was ‘Rock the Vote’, and encouraged people to go out to vote and have a voice. We believe that sex is an important topic and it needs to be addressed to the young people. We have found the right partner in Durex to do that. World AIDS Day is a good day to actually break the campaign. While the message has usually been around to have safe sex, I think the time has come now to promote the message about having safe sex.”

Swamy further said, “The theme of the campaign is ‘Let’s talk about sex’. We will be rolling out an extensive campaign over the next two months encouraging people to come out in the open and talk about sex. The more we accept sex, the better it will be for our society. We have an interesting way in using youth icon Ranveer Singh to talk to young people in a language that will make people notice. The communication that we have launched today is not a very preachy, serious kind of communication. It is something that will connect to the youth and encourage them to talk about the sex.”

The ‘Rex Talk’ campaign will be leveraged across TV, digital and social platforms.

‘Durex MTV Rex Talk’ is a two-week Bootcamp for 16 contestants divided into four teams. The four teams will be given tasks around evident social problems – Indians do not talk about sex, Indians are embarrassed to ask for condoms, etc. The show will be hosted by MTV VJ Anusha.

Commenting on the partnership with Reckitt Benckiser, Swamy said, “Globally Durex and MTV have a very strong relationship. We have a strong campaign running across the world and we are keen to do and explore that in India as well. A partnership happens when people realise that they are talking the same language. This partnership happened in one meeting with the top team at Reckitt.”

There is already a 30-second teaser available on the digital and television platforms. Today, the channel will also launch a two-minute version of it as a digital film. The channel has also launched few animation films and videos with young people around the theme ‘Let’s talk about sex’. In the black and white 30-second video, one can see Ranveer Singh talking into the camera and encouraging people to speak freely about sex.

A website solely dedicated to the campaign has been launched on which people can share videos, text, tweets and blogs. The website has a funky video with RJ Anusha showing how to register for the show.

On the social media front, the campaign is promoted via Twitter and Facebook. On Twitter, the company has shared pictures and the video related to the campaign. On Facebook, Durex has changed its cover picture with the theme of the campaign and has also shared the video and pictures.