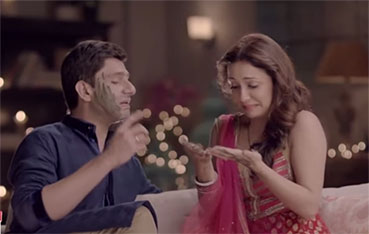 After the phenomenal success of Godrej 2013 Masterbrand campaign, the Group recently kicked off its Masterbrand Phase 2.0 campaign with eight new TVCs. The commercials launched this year, enhance the brand’s emotive appeal by showcasing the diverse range of products under the Godrej Group portfolio. The TVCs, conceptualised by JWT, continue to feature both Sam and Meera, who were also there in the previous Masterbrand campaign. However, actor Amir Khan is absent from the campaign this time.

"The campaign revolves around a young modern couple who discover a new idea from Godrej and a new aspect to their relationship. This is a sequel to celebrating ideas that make life better that made its debut last year. The Godrej products are interwoven in this very charming episodic campaign that showcases young couples in India who are home proud, gadget proud and relationship proud. ‘Godrej ka naya idea’ is the bedrock of each film where viewers discover the simplicity and joy of owning a Godrej”, said Tista Sen, National Creative Director, JWT India.

She further added, “Driving an image that is contemporary, friendly, relevant and young this campaign re-positions the brand to a friend you cannot do without. Supported on digital and online with twitter and Facebook this seamless communication celebrates the innovation at the heart of each Godrej product and thereby celebrates life.”

Shireesh Joshi, Head, Strategic Marketing Group, Godrej Industries, said, “Advertising spends this year is more or less similar to 2013, which is roughly around Rs 25 crore. We decided to not have Bollywood superstar Amir Khan, who was the face of the 2013 campaign, because we believe that, to keep it going we don’t require the same level of thrust. Moreover, this year, we plan to invest more in media buying and strong digital activations. The characters of Sam and Meera strike fresh ground and narrate stories that feel real, so real that these characters even have their own social media pages. This campaign moves ahead from the concept of 360-degree marketing, to a new level of cross-media seamlessness, never seen before.”

“Each product plays an integral role in Sam & Meera’s lives and home, by solving a problem and simply adding a smile, therefore creating a connect with har idea se zindagi muskuraye. In addition to TV, the campaign will be taken online where we’ll increase interaction with viewers in fun way! Coming soon!” commented Priya Pardiwalla, VP and ECD, JWT India.

Out of the eight commercials, the first TVC is for Godrej Appliances, showcasing the new product ‘U Sonic Washing Machine’ which has the unique feature of removing stains from clothes in minutes. Godrej Interio has launched two new TVCs, one of which is for its product ‘Karbonn bed’, which enables access to storage below the bed at the touch of a button, while the second talks about the product ‘Kreation Wardrobe’, which is a modular wardrobe, that changes according to the needs of the family.

Godrej Security Solutions has unveiled a new TVC for its ‘Video Door Phone’, which underlines product features like dual camera that can provide footage from two different points around the house and also has the potential to store around 100 photographs. GCPL has released two new ads for its products ‘Good Knight Fast card’ which gives relief from mosquitoes in three minutes, and ‘Expert Rich Creme’ hair colour which has no ammonia. Godrej Properties’ new TVC highlights properties at the best locations with good amenities. And GFTL, its new TVC, gives viewers a street food experience at home, with their frozen vada commercial for its product ‘Yummiez’.

According to Steve Mathias, VP & Senior Creative Director, JWT India, “The big challenge for us was to unify and have a singular thought and tone that runs across multiple product innovations from Godrej. Right from premium properties to a mass product like ‘fast card’, which are targeted at diverse target audiences. From furniture to appliances to mosquito repellents and ready to eat snacks, no other company owns and covers every aspect of homes as well as Godrej does. And that was really the starting point for Priya and me”.

Other than TVCs, this year’s campaign has many interesting features. Like the customer interface – ‘Free G’, which is India’s first non web-based mobile browsing experience, allowing every mobile user to give a missed call to 09980899808, and then experience the entire portfolio of Godrej offerings free of cost. This initiative will not only help the brand to get the numbers of those who are interested in their products, but also reveal which particular category they are interested in. The company believes that the Free G initiative has the potential to reach around 866 million consumers.

Another initiative in the pipeline is ‘Tweet a Tune’ – a consumer engagement initiative that will see the Group partnering with professional musicians on the song dew platform and creating songs inspired by tweets posted by Godrej patrons. The brand will then attribute the songs to each patron and, thereafter, dedicate the same across multiple media platforms like radio and social media.

Speaking about the brand’s success formula, Tanya Dubash, Executive Director and Chief Brand Officer, Godrej Group, said, “Before we started the master brand campaign exercise, we realised that we were not managing strategically, even though there was immense opportunity. However, we always kept in mind some strategic pillars, which helped to achieve our goals. The first of which was that the customers were changing, so there was a need to build the brand around customers. Secondly, we realised the importance of employee engagement, because if your employees don’t take pride in the brand then there is no way that they can deliver on the brand’s promise. On the basis of these insights, we redesigned our entire portfolio and repositioned our brand, and today, we believe we are not only innovative, but also understand what our customer wants.”

Adding to this, Joshi said, “We realised a few years back that our portfolio was successful, but it was fragmented. Consumers had very confused opinions and awareness about the brand. In 2010, we did a brand value exercise and there were four key realisations from it – first was to make the brand more emotional, organise around consumer needs, measure and manage results and finally, intelligent portfolio strategy. These elements were applied in the future brand campaigns of Godrej to connect better with the consumers. Therefore, the 2013 Masterbrand campaign saw good results and there was a rise in purchase in each portfolio in the Group.”