The fund-raiser campaign, ‘Hum Hain… Umeed-e-Kashmir’, aims to raise funds and awareness for flood-stricken Kashmir, which has suffered massive devastation of homes, property and livelihoods 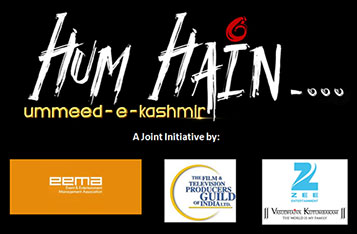 The fund-raiser campaign, ‘Hum Hain… Umeed-e-Kashmir’, aims to raise funds and awareness for flood-stricken Kashmir, which has suffered massive devastation of homes, property and livelihoods

The entertainment industry, led by the Event and Entertainment Management Association (EEMA), the Film and Television Producers Guild and the global media conglomerate Zee Entertainment Enterprises (ZEE), has initiated a fund-raiser campaign, ‘Hum Hain…Umeed-e-Kashmir’, to raise funds and awareness for flood-stricken Kashmir. The recent floods in Kashmir have devastated and unhinged the lives of many, resulting in casualties and loss of homes, property and livelihoods in its wake.

The relief campaign kicked off on October 2, also ZEE’s 22nd anniversary, with a message from youth icon Ranbir Kapoor calling on the nation to join hands and raise hope for the people of Jammu and Kashmir. The message was released along with a thematic music piece composed by Gulzar and Vishal Bharadwaj, and sung by Sukhwinder Singh.

‘Hum Hain…Umeed-e-Kashmir’ will strive to work alongside several NGOs, Government bodies, celebrities and civilians to give the cause a unified voice through a concert which will include a list of celebrity performers, and will appeal to viewers to donate to key NGOs and specified disaster relief funds in support of the Kashmir relief project.

All the proceeds from the event will entirely go to the charity United Way.

The campaign’s highpoint is the creation of simultaneous live events on ground, across seven cities- Mumbai, Chennai, Bengaluru, Hyderabad, Kolkata and Jaipur, apart from Delhi, on October 18. ZEE’s news channels will come together to connect the multiple events being held simultaneously across the country. ZEE’s anchors and network will connect the cities and performers live, 3 PM onwards, on that day.

Studios will also be set up in both New Delhi and Mumbai, where celebrities will send across poignant messages, perform and showcase films that bring alive the devastation and relief work undertaken in an effort to strengthen the appeal. A collection of celebrity memorabilia will also go on auction. All the money generated through the fund-raiser, through sale of tickets, donations, sponsorships, commercial time, auctions etc, will be given to charities in Jammu & Kashmir and the most-recently hit Assam.

Punit Goenka, MD & CEO, ZEE, said, “As a nation, we have always treasured Kashmir the most, our precious crown that it has always been. In such a calamity, it is nothing less than a moral responsibility of every citizen and corporate in India to step forward and extend the best possible support towards the relief. As a global media company, with a wide bouquet of multiple channels across the nation and a strong connect with over 730 million viewers, ZEE aims at offering dual support to this initiative. Firstly, through the advertisement revenues generated from the broadcast, which would be entirely donated to the relief work, and secondly by offering a nationwide reach to the event. Committed to ‘Vasudhaiva Kutumbakam’, which we espouse as our brand positioning, it is ZEE’s responsibility to step forward and work for its family, of which the people of Kashmir are an integral part.”

Speaking about the initiative, Amitabh Bachchan, said, “As human beings and as Indians we need to do all that we can to help our countrymen in need. The plight of the people of Jammu & Kashmir has always been a matter of concern and the floods have only made it worse. All that we do simply won’t be enough to meet the various challenges facing the people; but every drop counts. Hence, we call on everyone in our country and from the world community to come forward and provide their support.”

Sabbas Joseph, President of Event and Entertainment Management Association, said, “As we continue to plan the relief campaign, there is an optimistic energy building that we will be able to help rebuild Kashmir with a sense of solidarity that is representative by every film, music and sports icon coming together. The idea of creating multiple simultaneous live events showcases the strength, diversity and unity of our country; it also demonstrates the growing strength of the live and event management industry across the country. Bringing the country together is at the core of the initiative that we are building.”

Mukesh Bhatt, President of the Film & TV Producers Guild, said, “The land of ethereal beauty and purity is in tatters, devastated by nature’s fury. Kashmir, the embodiment of Indian culture & tradition, is crying for help from millions of fellow Indians. The Indian entertainment industry has shared a wonderful symbiotic relationship with the land of Kashmir over the years, and the time has come to repay the generosity and hospitality of Kashmiris in their time of strife. The industry has forever pioneered charitable causes, whenever India has been ravaged by tragedies and this time too, we would like to support our Kashmiri brethren and contribute in our own humble way to this gargantuan task of relief & rehabilitation. ‘Hum Hai...Umeed-e-Kashmir’ will not only assemble industry forces on a common platform of compassion & nobility, but, more significantly, appeal to the consciousness of the vast multitude of Indians to generously donate funds in our endeavour to provide some succour to the survivors in Kashmir."