Other than the ‘Mr and Mrs Verma’ commercials, Amazon has smartly integrated with the content in channels like Star Plus to woo Hindi GEC viewers. Experts have not written off Flipkart despite the ‘Big Billion Day Sale’ fiasco 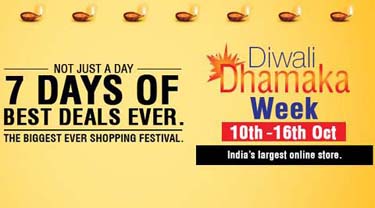 Other than the ‘Mr and Mrs Verma’ commercials, Amazon has smartly integrated with the content in channels like Star Plus to woo Hindi GEC viewers. Experts have not written off Flipkart despite the ‘Big Billion Day Sale’ fiasco

After Flipkart’s ‘Big Billion Day Sale’ fiasco involving a classic marketing ambush by rivals, irate customers and server crashes, all eyes and expectations are now set on the weeklong Amazon Diwali Dhamaka Sale which began on October 10 and will continue till October 16. However, it was quite a disappointing affair as the e-commerce portal started the big bang sale on a very low note. Amazon had to face similar flaks like its rival Flipkart, where users complained of technical glitches and lack of good discounted products on the first day of its sale.

In this hugely competitive space, there has been a furious race this festive season with every brand trying to adopt unique and different promotional strategies to sell. Other than the ‘Mr and Mrs Verma’ commercials, Amazon has smartly integrated with the content on channels like Star Plus. This is actually a clever way to woo the female Hindi general entertainment viewers, who also constitute the major decision makers for purchases. Its clever marketing strategy was already seen on the day of Flipkart’s Big Billion Day sale, where Amazon booked the portal www.bigbilliondaysale.com, and thus usurped Flipkart’s traffic.

Even though hopes are high and it is expected that Amazon would buck up its sales in the coming days, Swati Nathani, Business Head, Team Pumpkin, points out, “On one hand the Flipkart fiasco has left a lot of lessons for Indian e-tailers. On the other hand, there is certainly more to lose for the people who are next. Firstly, because they have to abandon the below price selling price completely, as both offline retailers and Indian Government are planning to probe the matter. Flipkart did that and got away, but the impact has now to be faced by others. Secondly, Rs 1,200 crore of merchandise at Gross Merchandise Volume (GMV) has already been sold online through Snapdeal and Flipkart. Customers have mostly bought what they wanted and this will have a negative impact on the ecommerce players who are late in the game.”

“Amazon’s Mr & Mrs Verma commercials, even though they are nice, are certainly not innovative. I feel that Snapdeal’s marketing has been commendable all this while. Whether it is about sponsoring Big Boss and integrating it in the show, or selling houses and cars online – Snapdeal has steered as the clear winner in terms of marketing strategy. The ambush marketing, therefore, only added to the entire advantage, and surely left a smile on the customers’ faces,” added Nathani.

Commenting on the average performance of Flipkart and Amazon on the above mentioned hyped days, Ravitej Yadalam, CEO and Founder, Pennyful Online, said, “I believe that such errors from any large ecommerce player are common and are to be expected. Considering the volume of customers that visit these websites on a ‘deals’ day and the huge load the website has to take on such days, the phrase ‘to err is human’ is very apt.”

Yadalam further said, “Besides TV ad campaigns, both Flipkart and Amazon have been extremely aggressive in the social media space as well. Such promotional activities have played a large and important role in directing customers to the websites. But the ambush marketing from Snapdeal was a very smart ploy, and it is therefore definitely on a par with its competition in terms of the marketing activities.”

Apurv Bansal, Co-founder, Wishpicker, commented, “Conducting a sale on such a large scale will be challenging for any major e-commerce player. This is the first time that Indian shoppers are being exposed to such heavy festival discounts online, and therefore, it will be difficult for the supply to keep pace with the demand, be it in terms of volume of deals available, or performance of the website.”

“The intensity of the competition seen in this space definitely makes it difficult for any one player to grab viewer attention. Going forward, I believe that in the coming years some kind of consolidation should definitely take place. While the customer wins the most from this kind of competition, it is however unsustainable in the long run,” explained Bansal.

According to Sankhya Acharya, Co-dreamer, Fame Per Second Advertising, “It has been quite a heady year in terms of e-commerce in India. Reports emerged in August that Amazon may start drone-delivery from India instead of the US. Flipkart, on the other hand, was caught guilty of FEMA violations. However, the e-comm business is a tough market and requires huge investment. While Flipkart managed to raise $1.5 billion and Amazon pledged $2 billion, all the players are yet to make profit.”

Acharya added, “However, if reports are to be believed, Snapdeal is planning a TV Shopping channel and suddenly the e-comm triangle in India has gone fierce to fiercer. Also, Big Billion Day has created a huge dent in the market among the traders and brands due to such a predatory pricing format. As per reports, brands are worried about their brick-and-mortar stores too. A Black Friday model will sustain or not is now the question in terms of Indian context.”