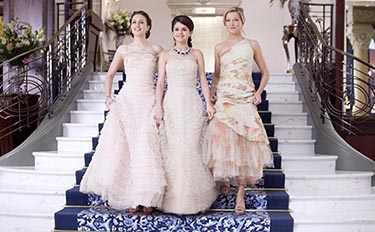 As part of the celebrations, Romedy Now has also released an upbeat music video titled ‘Have a Romedy!’, which follows the relationship of a boy and girl, touching upon precious moments like their first date or first party, finally culminating into a romantic surprise proposal.

Shantanu Gangane, Times Television Network – English Entertainment Channels, Cluster Head - Marketing, said, “Romedy Now caters to the fundamental human emotions of love & laughter. We are overwhelmed that this philosophy of the brand is well-accepted by our viewers and fans. We are celebrating the spirit of Romedy and we invite our viewers to join in the celebrations with us on September 22.”

From crazy adventures with friends to hilarious crisis situations at work, every night is a barrel of laughs with the happiest series on Romedy Now, be it ‘F.R.I.E.N.D.S’, ‘Jake in Progress’, ‘Traffic Light’, ‘Better Off Ted’, ‘2 Broke Girls’ or ‘Ally McBeal’.

The channel takes viewers to exotic locations with ‘Happy Journey’. From the winding streets of Italy in ‘Letters to Juliet’ to the bustling romantic city of Paris in ‘Monte Carlo’ to the gorgeous snow-covered Alps in ‘Chalet Girl’, Romedy Now has got a ticket for its viewers. To make the evenings interesting, the channel has a line-up of the following movies – ‘Valentine’s Day’, ‘New Year’s Eve’ and ‘Moulin Rouge’ in ‘Sundown Café’ which airs every Thursday at 6 PM.