Gary entered the New Blood Program after being nominated for a Yellow Pencil and winning Best in Show at the New Blood Festival. He feels that design and advertising should shift from ‘just profit’ to ‘pursuit and profit’ 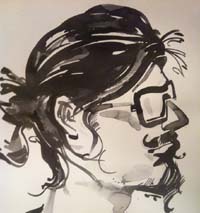 Gary entered the New Blood Program after being nominated for a Yellow Pencil and winning Best in Show at the New Blood Festival. He feels that design and advertising should shift from ‘just profit’ to ‘pursuit and profit’

When you get chosen to present your work in front of some of the biggest names in international design, you know you are doing something right. And being chosen by D&AD for its Young Blood Program only reiterates that. India's Gary Curzai has every reason to be optimistic about his future in the creative world because he has the best names backing him.

It was when Gary was studying BSc IT in Mumbai's Andrews College that he happened to meet Devi, whose mother ran a design agency. After a summer internship at her agency, he found his calling. He was around 17 years old at that time.

The turning point in his life was his decision to move to England and enrol in Middlesex University, even though it was never his first choice.

"Before deciding to move abroad for my education, I applied to every major design institute in India. None of them took me in or even gave me a chance. It left me feeling really bad about myself. But luckily I got the chance to move abroad and study Graphic Design in Middlesex University. They gave me a chance to do what I wanted to and because of that, I have achieved a lot in the last four years studying design,” he said.

Gary has used this opportunity to the fullest by interning with different studios and agencies. Last summer, he interned with Drum Ani Bombay, literally meaning Drums and Bombay. Live musicians played electric music while artist Abhinav Kafare painted on a big canvas during the show. The event also showcased a lot of young designers. The entire designing, advertising, planning and organising of the event was done by Gary and his old friend Devi.

"It was an extremely stressful two months but worth it in the end. Moreover, doing the show Devi showed me how important it is to use culture mixed with design to really make people feel a part of a company or movement," he said.

This blend of Indian culture and international learning is evident in his work which gave him the golden opportunity to be in the D&AD New Blood Program. Gary entered the New Blood Program after being nominated for a Yellow Pencil and winning Best in Show at the New Blood Festival. Gary along with 49 other young designers from around the world took part in the New Blood Program, which was held across two weeks in London.

"I’m extremely honoured to be selected for the Academy. Each day we had something new and fun to do. We had inspiring talks from leading advertisers and designers in the industry. We got to visit places like the Google Campus and MPC, where we worked on specialised briefs from them. Each day of the Academy could be an article in itself, and on the whole, it changed my attitude towards design and advertising. It made me realise the immense responsibility that is placed on creative people to change the world we live in, for the better. I will forever be grateful for the experience," Gary said excitedly.

During this time, Gary created a project - Graphic Katha - based on D&AD’s brief 'Make your mark'. The young designers were asked to visualise their own life stories in interesting ways. Gary used 'katha' or story telling through dance, music and art to speak about his life. “After two weeks of no sleep and too much tea, some typography and a fluid interchangeable grid system, I had a masterpiece in hand,” he recalled.

"From art to music, the people of India have always tried to make everything as beautiful as possible. Living in Bombay has given me a unique perspective on how the globalised part of India is moving away from its vast history. My design is based on how I feel the future of Design in India should be – keeping the exquisite art, while also giving it a modern twist," he said.

Gary wants to learn more about Indian advertising and wishes to open his own agency and work on social awareness projects.

Among his favourite campaigns from India is the Coca-Cola World Machine campaign, which has a touch-screen monitor being used to bring India and Pakistan together. He also likes the CSA campaign in which people from Third World countries wanting to learn English were connected to old people from First World countries who just wanted someone to talk to.

Gary strongly believes that design and advertising give people the opportunity to express themselves. To think creatively is important in the industry and is a value many of the great men in the field share.

"People need to understand the power they have. A great campaign can change the world. Instead of trying to ‘sell products to people’, design and advertising need to share values and information so people can live better with themselves and each other. The sharing of knowledge is extremely important. A designer can change the lives of millions of people. I understand that this can’t be done without making a profit. Therefore, the main aim of design and advertising should shift from ‘just profit’ to ‘pursuit and profit’. If you have a noble pursuit and you can make a profit on it, you can change the world," he stated.

Some of Gary's work: