If Arjava had an alternative career, he would probably be a Chef considering that his other big passion is food 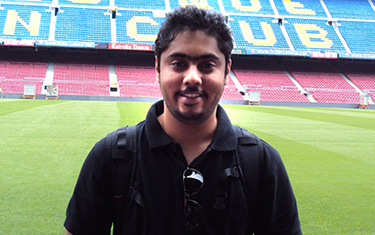 If Arjava had an alternative career, he would probably be a Chef considering that his other big passion is food

It is an irony that a guy who throughout his school life suffered from Arithmophobia (fear of numbers), one fine day finds himself in a job which requires him to mostly work on numbers, ratios and dimensions. Arjava Vig, the 26-year-old Creative Director at Foxymoron, believes that hard work and faith in oneself is the success formula to overcome any obstacle.

After completing his schooling from Cathedral & John Connon School, Mumbai, Arjava like any other confused young boy of that age was not sure what to do next. One of his friends was pursuing a Bachelor of Mass Media (BMM) degree, so he decided to do the same. His advertising career started the day he got through KC College, Mumbai. Arjava’s sister is a graphic designer and seeing her work on different projects actually got him interested and he developed a knack for designing. He says, “It was not an Eureka moment for me, that one day I woke up and decided to join this field. I sort of gradually walked into the advertising world.”

According to Arjava, the digital space is far more personal and you can get customers involved with the brand directly. It is a like a two-way streak and a much more interpersonal relationship is developed. However, the only flip side here is that the customer gets to snap on it easily. So, in today’s digital world, as a brand moves closer to the customer, one needs to be very careful at the same time.

Commenting on the challenges in this medium, Arjava explains, “Traditional advertising has been there for years and years and there is a set of certain rules which agencies follow. However, for digital advertising there is no rule book as such, so I feel this needs to change and it should become more organised. Then things like how does an agency deal with pitching for clients or how does it deal with working for their online and offline partners becomes much easier. I feel that people in our age group who started off at the beginning of the digital movement, should come together and decide on how to work as an industry. The moment this happens, both clients and the agencies will stand to benefit from this organized structure.”

Speaking about his inspiration, Arjava says, “There isn’t one particular person I look up to in the industry because we work as a collaborative force with so many unique people involved that one can't admire one particular individual. One should look at creative units, a motley crew of people from different backgrounds who come together to produce some amazing work. In this context, the one I have always admired is Amsterdam 180.”

According to the young Creative Director, it is not any one single book or movie which is a must for an advertising professional; it is all about thinking and being more open and receptive to different ideas. The idea is not to stand still and let the juices flow. Being a designer, he gets his kick from visual centric stuffs and therefore he loves to flip through magazines, browse different websites and absorb as much as possible.

Like every other creative guy, Arjava also believes in a lot of hard work. He derives at his Eureka moment by concentrating on the project and listening to soothing music. “Sometimes, if you are lucky, it happens easily, but for the rest of the times, it requires a lot of hard work. You need to kick-start the process somewhere, be it looking at your own work or some other’s work and then start absorbing as much information which is relevant to work on. For me, putting on the headphone and listening to music has a very therapeutic effect, it helps me to focus and block out everything around me.”

If Arjava had an alternative career, he would probably be a Chef considering that his other big passion is food. When he is not working, he likes to do stuffs which are pretty much opposite to what he does in office. Like avoid being in front of the computer, hang out with friends, spend some lone time and laze around in front of the television.

His advice to youngsters: “When I started my career, I wanted to copy and that is how a lot of the designers start off. But don’t fall a prey to copying stuff. Always defy conventions, keep challenging yourself with new ideas and never stop questioning yourself. Don’t just believe in stuff just because you have read it somewhere or someone has told you. Keep pushing yourself everyday to something better and always be your biggest critic.”

Some of the campaigns for which Arjava has earned awards are ‘Baby Lips Kiss Song’ campaign for Maybelline New York India (Finalist at Effies 2013) and ‘Power Light a Village’ campaign for Garnier Men (finalist at New York Shorty Awards 2013).

Arjava sums up his years at Foxymoron as nothing less than a roller coaster ride. “When I joined five years ago there were just five employees and now we have grown to nearly 200! During this time, I have had to keep evolving as the company did, from just focusing on my work to being responsible for the agency’s work.”

Any significant learning?  Arjava shoots back, “I think creative people are control freaks by nature, each one thinking they could have done a campaign a little better. A large lesson learned over the years has been to simply let go and accept that one cannot always be as involved as they would like to be.”