The brand has roped in a high-profile brand ambassador for the first time. The 40-second TVC by Lowe Lintas addresses the issue of leakages in households 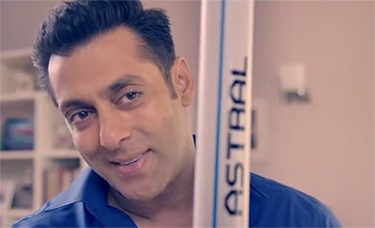 The brand has roped in a high-profile brand ambassador for the first time. The 40-second TVC by Lowe Lintas addresses the issue of leakages in households

Astral Pipes, the sanitary product offering from the house of Astral Poly Technik, has released a new campaign featuring actor Salman Khan. This is the first time that Astral has roped in a high-profile brand ambassador. Lowe Lintas has conceptualised the campaign which addresses the issue of leakage problems in households and provides a solution.

The 40-second TVC shows a family going crazy trying to tackle the problem of leakage in their home. All their attempts turn futile, as they run around in the house with buckets, glasses and other vessels to stop the leakage. At this point Khan enters the scene as the plumber and advises them to use Astral Pipes to get permanent relief from any leakage problem.

The challenge for the agency was that with a large number of players operating in the market place, the communication had to be different yet appealing. While leakage is a common problem that households face, not many players come forward with the promise of offering foolproof solutions to tackle the problem – something that Astral Pipes conveys with conviction in the commercial.

Explaining the campaign’s concept, Sagar Kapoor, ECD, Lowe Lintas, said, “Being a low involvement category, the homemaker does not take keen interest in deciding on the quality and make of pipes for their homes. With leakage being the most common problem, it is the plumber who decides on what to purchase, without even consulting with the homemaker. Through this TVC, we wanted to convey that if you wish to resolve the issue, then it is essential that you tend to the root problem: bad pipes.”

Sandeep Engineer, MD, Astral Poly Technik, said, “Our association with Salman Khan is in sync with our brand communication that highlights the strength of our products. We are confident that our association with him as the brand ambassador will further strengthen our brand image and take it to the next level.”

The company plans to put out more executions of the concept on various online and offline touch-points including television, social media, outdoor and activation, to reach out to the masses in the coming months.