Sarvesh has achieved what few in advertising dare to dream of - a kitty full of international awards. Having spent over six years in healthcare advertising, he took a leap of faith and moved to mainline - and has been shining ever since 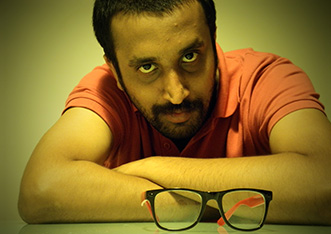 Sarvesh has achieved what few in advertising dare to dream of - a kitty full of international awards. Having spent over six years in healthcare advertising, he took a leap of faith and moved to mainline - and has been shining ever since

Not many people can boast of a Cannes Healthcare Lion in their first few years of work. But then, not many people are Sarvesh Uday Raikar. A winner of over 65 national and international awards and nominations at Cannes, Clio, New York Festivals, AdFest Pattaya, Spikes Asia, RX Club New York, Abby, Kyoorius D&AD and Mirchi Kaan, Sarvesh is an easy to talk to chap at Scarecrow's Mumbai office.

Just like most teenagers, Sarvesh grew up with a lot of friends who thought the best life is when you studied engineering, got a job at Infosys, went to the USA in an offshore placement and spent the rest of your life there. But somewhere deep within he knew that art was his calling. Maybe that has a bit to do with the fact that his parents are artists - both of them having passed out of Mumbai's prestigious JJ School of Arts.

"I have to thank mathematics for giving me a wakeup call - and sleepless nights, of course! Borderline passing marks made me rethink what I could possibly enjoy doing. Hence, post 12th, I took up BMM, as that was any day better than trudging through BSc.," he quips.

While in college, Sarvesh took up several part-time jobs including joining the creative and marketing team at Indage Hotels, which in those days handled a lot of the hippest night clubs. As a result, he was often caught napping in class. And this gruelling balance between work, studies and sleepless nights was a perfect pilot run for what was to come in the future.

"There is no method to advertising. Hence it is very difficult for it to be taught in classrooms. Plus, BMM as a course was very new, and we were more like guinea pigs for the board than students. Whatever I have learnt about advertising is all on the job."

Sarvesh started his career with Sorento Healthcare. Over the years the company, a legitimate frontrunner in that field, won a lot of international awards including Rx Club (USA), New York Festival awards, etc., even managing to get among the top 5 at the inaugural CLIO Healthcare awards. But Sarvesh and the folks at Sorento felt that there was still something missing – a mainstream award perhaps.

"Relatively speaking, healthcare agencies don’t have big risk appetites for awards, unlike their mainstream counterparts. So, after great persuasion, we managed to get an approval to send just one entry to Cannes Lions. And bingo, it hit the mark! The campaign went on to win an Abby Gold and was even published in the Archive magazine. It was the first time a healthcare agency had gone so far. It was also our answer to many people, inside and outside of healthcare, who thought it offers less scope for creativity," he remembers.

Having spent over six years in healthcare, Sarvesh by then had built up a great partnership with his art partner Dinesh Ghosalkar. Sarvesh heard the same thing from many people - that he should move to mainline as soon as possible. He met many a people, some of whom who liked his work, some who didn't have enough faith in his capacity to switch to mainstream.

"Honestly, I was never worried. I had found a fabulous mentor in Rajesh Rai. Working with him instilled self-belief that my process of cracking a campaign was right, and mainstream is nothing but a change in media," he answers.

After meeting Raghu Bhat, he joined Scarecrow in 2010. Sarvesh was the first senior level hire for the agency where he has worked on big accounts, won awards, led teams and worked in close quarters with Raghu and Manish Bhatt.

According to Sarvesh, Scarecrow's USP lies in its culture. The agency makes an effort to understand every client's real world business problems and offer solutions which often go beyond just TV, radio and print media. That, he feels, is the reason why the agency has won and retained so many accounts. He fondly calls it his 'zip file of experience' where he has changed his learning curve.

"It is an open feast for those hungry to do good work. Today, we have brands in almost every category and opportunities are plenty. This means there is no time for non-productive things like politics. It is a lateral floor, where the junior-most person has direct access to the senior-most, including the founders."

Sarvesh likes working in all mediums, be it radio or television or print. He has worked with a multiple array of brands like Nestle, Danone, Star Network, Reliance Brands, Emami Sona Chandi, but he still wishes that he had worked on the Zoo-Zoo campaign. That, according to him, is the only campaign which has excited the whole nation - across all strata. And he is almost sure that even two decades later, people will remember it with a smile.

But Sarvesh has a portfolio of some marvellous work himself. Be it the Quickr Riot ad, or the Eye Bank Association's 'Dog' Film. He explained that the latter film is one of his favourites because it genuinely moved thousands of people. Eye banks from other countries shared it and it trended for almost a week on YouTube’s most popular videos in India list.

He advises youngsters not to come with any pre-conceived notions nor fall for stereotypes. "Focus only on your work. Because it’s the only thing that can float your boat. Be a good human being. There will be times when things don’t work out. On such days, don’t hit Madeera, Ghettos or Totto’s. But just work your way out of it."

But all that has not made him content with his life enough to stick to advertising forever. He kids that maybe in five years from now he will exit this field and start something bizarre, like a theme restaurant where original Aborigines can dish out food and even shake a leg for the patrons. Or start a dotcom with an innovative proposition.

That obviously does not mean that he doesn't love advertising. After all, which other field will 'pack un-sameness into everyday'? Some changes would have made it better for him though.

"It would be great if clients could weigh their gut-feel more than research findings. Especially, those who are always in a ‘save-ass’ mode. What has happened can be researched. How can you ever research something that has never happened? As creative people, we are always pursuing the new," Sarvesh reasons.

But then, probably he has the ability to use his ears and eyes more than his tongue. And also, probably, he has the patience required to make it big in this field. As tempting as it sounds, maybe the theme restaurant should wait a bit longer, because advertising surely hasn’t seen enough of this young guy.