Akshat wanted to make it big in rock music, but advertising happened to him when he was least expecting it. Ten years down the line, he is convinced that the advertising is very similar to ‘Rock and Roll’ music – strong, hard hitting, impactful. His mantra: the best ideas are the simplest, so don’t complicate life too much for yourself 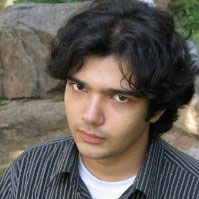 Akshat wanted to make it big in rock music, but advertising happened to him when he was least expecting it. Ten years down the line, he is convinced that the advertising is very similar to ‘Rock and Roll’ music – strong, hard hitting, impactful. His mantra: the best ideas are the simplest, so don’t complicate life too much for yourself

He is a guy who always found his inner calling in music and derived immense pleasure in combining poetry with his compositions and played in rock bands as his passion. So, how did he end up in advertising, racking his creative brain on briefs given by clients? Akshat Bhardwaj, Creative Director, DigitasLBi, says, “Advertising happened as a result of an unexpected qualification to the Indian Institute of Mass Communication (IIMC), Delhi. I am glad I didn’t know what I wanted from life at that point of time and simply followed where it took me.”

Akshat sums up his childhood as a ‘football match’ - the first half of which was pretty defensive because of his coastal upbringing, and the second half was all about aggressive civilian adaptation in sub-urban Delhi. As his dad was in the Navy, most of Akshat’s schooling took place in Army/Navy institutions across the country. He completed his graduation in English Honours from Ramjas College and went on to pursue the Advertising/PR course from IIMC, Delhi. It was here that his professor, Late Nandu Narasimhan, helped him identify his real creative spark and told him, “You can and you should be a copywriter.” Akshat owes everything to his professor; had he not pushed him in the right direction, he is sure he would have still been struggling to identify his inner calling.

“Professionally, I started working at the age of 21 as a postgraduate intern at Saatchi & Saatchi, Gurgaon. But creatively, I started at 16 by writing songs for my bands, articles for local magazines and poems for the undeserving angels from the past. I was going very strong with music in my Delhi University days and it was great fun to travel around the country with your band. Today, whenever I miss music in my life, I play for myself. I strongly feel that the advertising industry is also very similar to ‘Rock and Roll’ music – strong, hard hitting and impactful,” says Akshat.

He joined DigitasLBi as a copywriter in October 2010 and today, after almost four years, he is the Creative Director in the same organisation. At work he gets his inspiration from his boss, Partho Sinha, who is the Chief Creative Officer at DigitasLBi. Says Akshat, “Partho knows the way ahead and that’s what matters to me. My art partners are also very important to me and my team keeps getting better every day. My journey at DigitasLBi has been quite fast, not in terms of the years but at the pace at which we churn out great work. When I joined, digital as a medium was not explored, but today it is going extremely fast, with trends changing every other day.”

Akshat says there have been two essential learnings from his stint at DigitasLBi. One is that the notion ‘all clients are evil’ is incorrect; the truth is that they are “actually more involved in the campaign than us”. Secondly, he refrains from copying any trend and makes sure that the outcome is something that is not a result of any copying act. For Akshat, David Ogilvy has been a brilliant teacher from popular culture, and his teachings have left indelible footprints in his mind, which he likes to refer to whenever he is in doubt.

Akshat has worked on some of the best campaigns in the industry and considers Samsung Mobile to have given him his first real break on the digital front. “Great campaign came out of amazingly liberating briefs, like for Samsung Galaxy S 2, Galaxy Note, Galaxy Note 2 and Galaxy Tab, which happened one after the other. I have been a key conceptualizer for award winning campaigns like ‘The Great Gadget Hunt’ (Samsung Galaxy Note Launch), ‘The Incredible Art Piece’ (Samsung Galaxy Note 2), and most recently for ‘#DoTheRex’ campaign from Durex. Do The Rex is amazingly my first campaign as Creative Director and it couldn't have come at a better time. I am just glad that an honest thought has been well received but I still want to be sure whether it has helped sell the product,” he says enthusiastically.

Unlike most creative persons, Akshat doesn’t need a cigarette whiff, or an endless intake of caffeine to kick-start his creative thought process. He derives his Eureka moment by starting to seek an insight. “I have come to believe that they are usually best found when you stop searching and simply close everything and go home to chill. When I get an insight, I get many ideas and the best idea then sells itself,” says Akshat. Today, he makes it a point that however caught up he might be at work, he still takes time out for himself. During these personal moments he prefers to do nothing but just think. He looks at thinking as a constant stream of content which not only enriches him, but also refreshes his mind, body and soul.

On being asked if there is any campaign that he regrets doing, he replies, “As you do better and better work while you grow in your career, you look back at your earlier work as steps to see where you are now. So while these steps might not have been the best, they were definitely necessary. There should really be no regrets when you work in a creative field, but sometimes things do go out without your heart's approval. For example, almost all my work for a major telecom giant never managed to keep me happy. I was always concerned about how much it would change before it would go live, and more often than not, it always changed to something entirely different.”

He lists a few of his best works other than the #DoTheRex campaign. They are ‘The Great Gadget Hunt’ which won a Bronze Abby at Goafest 2011; ‘The Useless Bid’ which bagged Gold at IDMA, 2012; and ‘The Incredible Art Piece’ which got him a Silver Abby at Goafest 2012. A lot of work for Samsung Mobile has ended up winning international awards in the last few years. ‘Hip Apps’, a brand building idea for Samsung won Gold at the 2012 PMAA and a few more ideas won Orders of Merit at the same awards last year.

Like every advertising guy, Akshat also has few dream projects which he wished he had done. Internationally, he would have loved to work for the Heineken Odyssey Interactive Film. He feels it was not just inspiring but very enlightening on the creative front. Nationally, he is a big fan of Centre Fresh ads and would have loved to pen down a script for them, and would love to do so even now!

He feels worried looking at the lack of talent in the advertising industry. However, he is optimistic, and feels that the scenario can change if students are made aware of it from their school and college days. Ten years down the line, young Akshat hopes to change the world through his work by supporting things which are right. He has started his small bit in his recent campaign ‘#DoTheRex’, which emphasises the fact that we all know that sex is right, but it is still considered a taboo. This campaign was an attempt to break free from the myths and speak about sex more openly.

Akshat’s advice to youngsters: “Start observing everything around you and who knows where you will get your idea from. Always remember that the best ideas are the simplest, so don’t complicate life too much for yourself. A must for all advertising professionals is not a book, but it is a movie called ‘Apollo 13’. It is a film where three astronauts must devise a strategy to return to Earth safely after their spacecraft undergoes massive internal damage. This movie teaches you that dedication and perseverance is of utmost importance to help you tide through any difficult situation. We face problems every day in the advertising industry also, but instead of getting disappointed, the trick lies in getting excited and finding an immediate solution.”

Watch some of Akshat Bhardwaj's works: