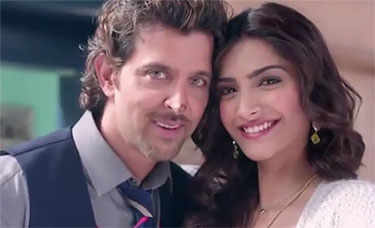 The newest entrant in the mobile handset space, Oppo, has launched a full-fledged multimedia campaign. Featuring brand ambassadors Sonam Kapoor and Hrithik Roshan, the campaign has been designed by Linen, a Lintas group company.

Constantin Haoran, Head of Brand Development India, Oppo, commented, “Oppo endeavours to deliver customers with the most delightful smartphone experience through meticulous designs and smart technology. The aim is to recreate the overseas success story in India.”

According to Linen, any mobile advertising is complex, yet simple. It is complex because of the structure of communication. However, it can be made simple if a story is given. Linen decided to tell a story through which it also showcased the features of the phone.

“The TVC is long format, which follows the recent onset of a new category of communication designed specifically for the digital space and a certain audience type which many call a YTC - YouTube Commercial. The fact that the TVC earned more than 15 lakh views on YouTube in the first 15 days of its release is a testimony that we have managed to achieve both. Now with the launch of the commercial on television, we wish to multiply this traction,” said Abhik Santara, Executive VP, Linen.

The objective of the campaign was to define a unique brand space for Oppo, differentiating it from the other handset makers who are already vying for space. Oppo is a mix of design, technology and emotions and the campaign beautifully brings out the three facets of the product as well.

Pranav Sharma, Group Creative Director, Linen, and the writer of the campaign, commented, “The 3-minute short film revolves around three characters – two celebrities and one phone. The project followed a lengthy and complicated process which is similar to a feature filmmaking and is different from a quick TVC production process. After locking the script, character sketching was done for both the celebrities, a detailed screenplay was written, where every shot was broken down to its minutest detail. Doing away with the regular advertising jingle space, we churned out a 3-minute song for the film.”

The film opens with a young boy and girl sharing an ice cream cone. They are shown as best of friends, fighting and joking around with each other. However, with time they go their separate ways but are fondly remembered by the other. Hrithik holds on to one photograph of their childhood as the last memory. As life takes him places, he remembers his friend but has no way of getting in touch with her.

One day, he chances upon a beautiful girl – Sonam Kapoor, of course – working across from his office. He is mesmerised by her and starts taking her pictures on his Oppo smartphone. They slowly become friends and one day while showing her the pictures he has taken of his muse, he skips to the childhood picture of his. He is embarrassed and looks away, only to realise that Kapoor is holding up the same picture on her phone. They finally meet and take a 'selfie' together and share their old memories once again.

The campaign is made beautifully and touches the heart for sure. The background music only adds to the charm without taking anything away from the story. But what strikes one most in the ad is that they have managed to show the features of the phone subtly within the story itself. Like the swapping feature when Hrithik Roshan shows the pictures to Sonam Kapoor, or the rotating camera which is highlighted during their selfie moment. While the features come out strongly, they do not overpower the story, making for a nice, warm campaign.

Jaideep Mahajan, Executive CD, Linen, explained, “Oppo wasn’t known in the Indian market. But despite that they chose to enter by launching the flagship device priced at around Rs 40,000 where they would be competing with the best of the phones from the biggest of brands. We decided to narrate a story, where the phone and the features take the story forward. There are a lot of firsts in this communication. To begin with, the pairing of Hrithik and Sonam as a couple – which has never happened either in ad space or in Bollywood films, and the way the product is handled and not falling for using  Hrithik’s dancing skills to grab a quick eyeball.”

Haoran said about the creative approach, “Compared to simply focusing on the specs, we wanted to adopt a more non-intrusive and emotional approach that makes consumers actually feel what they can get from Oppo behind those less interesting technical terminologies. And that was the brief given to the Linen team. We are glad to see the TVC receiving a positive response in the market and trade. It is a great debut for the brand in India.”

The film has been directed by Siddarth Anand (who has directed hits like Salaam Namaste, Bachna Ae Haseeno, Anjana Anjani, etc.) and produced by Film Farm India.