The campaign, ‘Life is Kabaddi’, for Star Sports, was executed in two phases; it refreshes the image of the sport and creates an emotional appeal with the younger generation 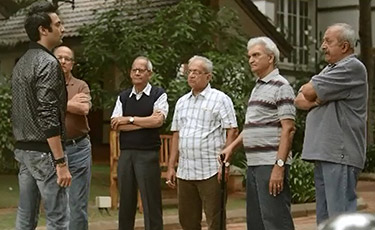 The campaign, ‘Life is Kabaddi’, for Star Sports, was executed in two phases; it refreshes the image of the sport and creates an emotional appeal with the younger generation

Star Sports, the official broadcast partner for the Pro-Kabaddi League, has rolled out a series of engaging films as part of its ‘Life is Kabaddi’ promotional campaign. Ogilvy India, the agency behind the campaign, executed the entire campaign in two phases.

Piyush Pandey, Executive Chairman & Creative Director, South Asia, Ogilvy & Mather, said, “Kabaddi is the ultimate combination of power, agility and tactics. It is one of India’s unique treasures and I am glad that we are able to present it an international stage in such an exciting format.”

Abhijit Avasthi, National Creative Director, Ogilvy & Mather, said, “Kabaddi as a sport is forgotten by today’s generation and the task assigned to us was to change the image of the game and make it look ‘cool and relevant’. We therefore thought that the entire concept of Kabaddi being a mud sport wasn’t helping us and thought of something new which would create an instant connect with today’s generation.”

The first phase started with five teaser videos being released on the social networking sites, which captured the essence of the entire film but without revealing everything. In this phase, short and stunning visuals along with action-packed moments in a contemporary way were shown without letting the viewers get an idea of the sport. The enthusiasm was further amplified with #GuessTheGame on Twitter which created a buzz all around. This was also aimed at creating an intrigue about a new sport coming, while at the same time, also highlighting the inherent athleticism of Kabaddi.

Thereafter, a set of two thematic films was released on television, where the main thought was to draw a parallel between the spirit of the game and life. The first of the thematic videos showed how a group of elderly men together taught a lesson to a young guy who littered the streets and made him aware of his mistake. The second film shot in a school campus showed how a young boy being bullied by his school seniors, stood up to them. The main crux of these films was ‘Jeet Te Wahin Jo Haar Nahi Mantey’. The films showed that grit and perseverance are needed in life to achieve what always seems to be out of reach, and this is very similar to the spirit of Kabaddi, where a raider aims to invade the opponent’s territory, leave a mark and return to his home ground.

Finally, as part of the reveal campaign, two films were launched during the pre-show of the England-India Test series on July 12 on Star Sports 1 and Star Sports 3, which exposed the Kabaddi league to a large cricket frenzy audience.

“We decided to refresh the image of the sport and connect it at a more emotional level with the audience through the various phases of our campaign. Our aim was to make them believe that the game is much closer to them than they think and that is how ‘Life is Kabaddi’ campaign originated. The campaign is being promoted across a 360 degree marketing platform,” added Avasthi.

The Pro-Kabaddi League is a professional Kabaddi league and the inaugural match kicks off on July 26, with eight franchises consisting of players from around the world. The format of this game is quite similar to the Indian Premiere League (IPL) and is currently supervised by Charu Sharma, Managing Director, Mashal Sports.

Commenting on the campaign, KV Sridhar aka Pops, Chief Creative Officer, Sapient Nitro, said, “It is a good effort. However, I felt that something was missing in the films. The cue of the sport Kabaddi was very less and I somehow felt that it failed to make the right connect. The thematic campaign speaks very little of the sport and in fact the use of the iconic sound track of Kabaddi would have created a better impact.”

Prathap Suthan, Managing Partner & Chief Creative Officer, Bang in the Middle, commented, “Kabaddi as a game is all about mud, dirt, inner spirit, muscle and machismo. So if you take these away, it loses its genuineness. The campaign tries to give Kabaddi a cool look, but it in turn looks artificial because of the absence of mud and the location in which it was shot.”