The new campaign, conceptualised by Ignitee Digital, has clocked half a million views and is the second most-watched video in just one day on YouTube 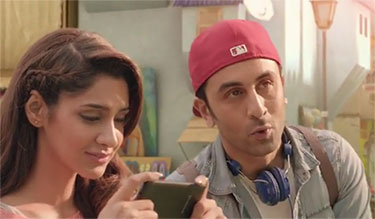 The new campaign, conceptualised by Ignitee Digital, has clocked half a million views and is the second most-watched video in just one day on YouTube

AskMe, a popular search engine, has roped in actor Ranbir Kapoor for its latest campaign ‘BAPP of all Apps’. The campaign consists of multiple commercials released online, with an aim to launch the AskMe mobile app as a one-stop destination for all your needs. This app offers information on deals, classifieds, local search, buy now and voice features. It is also available on Play Store and iTunes. The campaign, conceptualised by Ignitee Digital, has hit the digital first and will be followed by television.

The focused digital-first campaign shows a girl in a new city and she is confused by the numerous apps on her mobile phone. Ranbir helps her by asking her to first delete all the other apps and just download the AskMe app, which will guide her with all the relevant information one requires. It has set the digital small-screen on fire by clocking an overwhelming half a million views in just one day! The phenomenal response from the fans has also made it the second-most watched video in the last 24 hours.

The brand has also released special edits, especially for Instagram.

Ranbir will also be seen essaying different, quirky characters in a series of videos as part of the extensive digital-led campaign. Some of these characters are a tribute to iconic Bollywood characters like Don, Gabbar and Veeru from Sholay, Shahenshah and more. Not only has the brand tried to encash the popularity of Ranbir Kapoor, it has also used the blessings of Alok Nath aka Babuji in one of the commercials to connect with the audience. The films end with the tagline ‘Ask Me Anything’.

In each of these films, Ranbir is communicating with an audience who is looking for some quick and relevant information on their mobile with the click of a button. It is said to be one of the biggest campaigns that have been put together by a brand for the new-age internet users looking for relevant information around local and personalised discoveries on their mobile.

Atul Hegde, CEO of Ignitee Digital, said, “It's great to see large brands like AskMe go the digital-first route, especially with such a high profile celebrity campaign. It’s made to order for Instagram, YouTube, Twitter and then TV. We have created a massive body of work with more than 25-30 films across these mediums. The use of a superstar like Ranbir was done keeping in mind that we want to connect with the young and digital savvy consumer.”