Ogilvy designs ‘The Seatbelt Crew’ campaign featuring the transgender community to impart a strong message on road safety. The campaign has gone viral and has earned praise from the creative fraternity 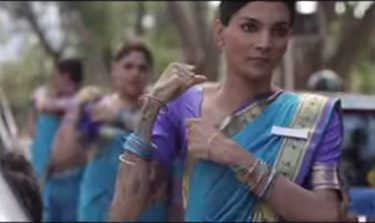 Ogilvy designs ‘The Seatbelt Crew’ campaign featuring the transgender community to impart a strong message on road safety. The campaign has gone viral and has earned praise from the creative fraternity

Feeling blessed? Feeling lucky? That could change in the blink of an eye, and we all know it. An accident can turn lives upside-down. And no matter how many good charms you carry or blessings you get, nothing will make life the same. And yet, the easiest precaution that can be taken is ignored by most people on the road.

It is this idea that has prompted Channel V – the makers of the VithU app – to make a brilliant new campaign with the help of Ogilvy & Mather. The idea of the campaign is to make people aware of the safety precautions they should take in a fun and entertaining way.

The VithU app is an app about safety. While its previous focus has been on emergencies where select contacts would be automatically informed if you are in trouble, this time the app is looking to educate reckless motorists who ignored the seat belt safety rule. To make this lesson interesting and fun, they roped in the one community which is considered as the bearer of good luck. The Indian transgenders or eunuchs are considered to be touched by God and their blessings are regarded in high esteem. It is because of this that the community comes to bless new-borns and newly-weds. In a day-to-day life, transgenders can be seen exchanging blessings for money in local trains and traffic signals in Mumbai. This gave the folks at Ogilvy an idea to work on.

“This is an idea which we see every day. And they have their own unique way of getting attention. Also, we noticed that when people are at a traffic signal they have more time and, therefore, it is conducive to giving out a message on traffic safety. We collided the two ideas and got this finally. We dressed them up as an airline crew which made it even more interesting,” explained Abhijit Awasthi, National Creative Director, Ogilvy & Mather.

The video, which went viral some days back, shows a group of eunuchs getting dressed like air-hostesses. They then come to a traffic signal and in their signature style (with claps and loud noises et al), remind people to wear their seat belts. The message is made even more memorable with the use of colloquial Hindi terms.

“We are constantly on the lookout for getting the VithU safety app across to as many people as possible. With the tagline ‘Be Safe’, this campaign has been an innovative and highly noticeable way to do so. We are extremely happy with the response the film has got. With over 1.2 million downloads, we will be looking at ways to build on this and take it forward,” said Prem Kamath, Executive VP & General Manager, Channel V.

The brand and the agency is hoping to keep the conversation going with more activities, though nothing concrete has been planned yet.

Thumbs up from creative honchos

KV Sridhar, or Pops, former Chief Creative Officer, Leo Burnett, who is set to join SapientNitro, says the campaign gets full marks on idea, connect and set-up. “The idea is dramatic and there is a natural connect. And it is wonderfully creative that they have used the transgender community to make people feel ashamed about their ignorance.”

However, Pops wishes that the campaign should somehow be scaled up. He suggests a multi-location approach with coordination from cops and maybe big businesses. Commented Pops, “The grandeur in scale and size would have helped it so much more than just this. I understand that a viral video's future lies not on the act but on the video footage itself. The way they have documented it is wonderful but if they had scaled it up it would have made a bigger impact, and probably fetched them more awards.”

It is not about awards, according to Bang in the Middle's Prathap Suthan. He feels that the campaign is definitely interesting and the content is presented in the right way to make it attractive to the target audience, in this case, people driving cars.

“We have always seen transgenders at traffic lights. So what they are doing, in the middle of the road, is a complete head-turner! And an added humour is the way they present the message, dressed in the way airline cabin crew are dressed, while giving out safety instructions. Unfortunately, the gimmicks might not work. People while watching and sharing the video, might not pay too much importance to the message. The thing is that we are more in awe of these people than we are amused by what they are trying to tell us. This is the critical disconnect I can see. But I am prepared to overlook that because of its quirkiness. I hope, though, they have done it seriously and not for just the awards season. They should use this opportunity and take it forward.”

Sam Ahmed, former Chief Creative Officer, Rediffusion Y&R, shares the views of Pops and Suthan. He recognises that the campaign has been executed nicely and is strong on the messaging. “It is a very interesting piece. They have made the ambience fun around road safety. The campaign did make me think, so I will say it has an impact. But maybe it would have been better had they included maybe footage of accidents, etc., to drive the point home. To make it sustainable, however, they can't just stop now. Only by doing it repeatedly will they be able to make a bigger impact.”