Instituted by the Press Club Mumbai, it has received an overwhelming response with over 800 entries from 75 print and internet publications. The Awards will be held on June 7 in Mumbai 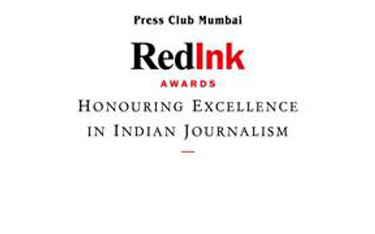 Instituted by the Press Club Mumbai, it has received an overwhelming response with over 800 entries from 75 print and internet publications. The Awards will be held on June 7 in Mumbai

The Press Club RedInk Awards for Excellence in Journalism 2014, instituted by the Press Club Mumbai, has received an overwhelming response with over 800 entries from 75 print and internet publications. This year’s entries have also been characterised by a significant number of web-based and online journalists pitching their stories. This shows online journalism and web-based platforms becoming increasingly active and popular as vehicles of mass communication.

The Awards have now moved to the stage of evaluation and judging. The Press Club has convened a transparent process of forming juries consisting of three-member panels for each of the 10 sections of the awards. The juries are a mix of industry experts, well-known knowledge leaders and senior journalists. The panels include eminent names such as Shyam Benegal for the ‘Entertainment and Lifestyle’ section, Rahul Dravid for the sports category, Dr Swati Piramal judging ‘Health and Wellness’ entries, Dr KC Chakrabarty, RBI Dy. Governor , for ‘Business’ section, noted lawyer Satish Maneshinde for ‘Crime’, and celebrity lensman Pablo Bartholomew sitting on the photography jury.

The Grand Finale for the RedInk Awards will be held on June 7, 2014 at the Jamshed Bhaba Theatre, NCPA, Mumbai.

The Awards, which offer Rs 1 lakh to each winner, is in its 4th year, and is the only recognition of merit for journalists from a professional platform. The Awards this year have expanded to include new categories like ‘Human Rights and Environment’. Juries will judge breaking news stories and features separately this year as the two categories involve different skill sets.