This year’s IAA Olive Crown Award winner, Ramnathkar wanted to become a street photographer but got attracted by the energy and madness of filmmaking. He feels the only way to do make it to the top is to be passionate about every bit of filmmaking 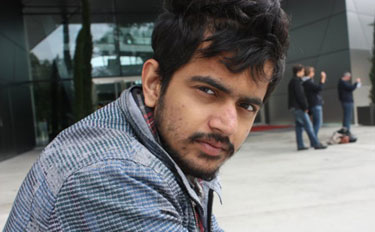 This year’s IAA Olive Crown Award winner, Ramnathkar wanted to become a street photographer but got attracted by the energy and madness of filmmaking. He feels the only way to do make it to the top is to be passionate about every bit of filmmaking

There are a lot of people who create the one ad you love on TV. There are the people who give the ideas and people who call the shots. And in between all of them are also people who make the idea come alive with their visual thoughts.

This year's Olive Crown winner, Kartik Ramnathkar, is one such man. Co-founder of the production house, Balls Worldwide, Ramnathkar is a bright young filmmaker from Mumbai.

After studying Arts in Jai Hind College, Ramnathkar studied Applied Arts in Mumbai's Rachna Sansad. Without a formal degree in filmmaking, he interned with Ravi Udyawar in RU Films. Post the month-long internship he worked with the same production house for two and a half years. This came in handy when he co-founded Balls Worldwide and also during his freelance assignments.

“I have always had an inclination towards photography. But after the internship, I was so inspired by him Udyawar and the process of filmmaking that I decided to pursue it as a career. I felt that filmmaking was a field wider than photography and offered me a bigger canvas. I was pulled by the energy and the madness that goes on, on the sets and behind the scenes. Every time I hear ‘lights, camera, action’, I get goose bumps, it is a feeling I still cannot explain,” exclaims Ramnathkar.

His production house, Ball Worldwide, has made campaigns for Integriti Clothing, Fashion at Big Bazaar and Carlton Bags. Ramnathkar said, “Balls Worldwide is an ad film production house that encourages and nurtures innovation. With an attitude that bounces from their name, this production house is known for its indifference towards the conventional style of storytelling. Work here is purely driven by passion and fuelled with love for filmmaking. If you’re in advertising you need balls.”

Ramnathkar's backup plan would probably be to return to his first love – photography. Maybe as a street photographer he would travel around the world, experiencing different cultures, meeting different people.

But would he take any other career now that he is in it? He thinks not. According to Kartik, what sets filmmaking apart is the travelling and getting an opportunity to see and experience different parts of the world. “I always like to observe different characteristics of people and places and portray them through the medium of film. I think this is the only medium which helps reach out to a billion and more people through both audio and visual.”

He understands that the industry might have odd work hours, pressure, rivalry, etc. But he has decided to stick it out. Ramnathkar feels that the art of filmmaking is very interesting and he is “so engrossed in the whole process that he doesn’t really notice any of these things”.

At the same time, he does wish that ad agencies showed more confidence in younger people like himself. He personally sees a lot of youngsters doing great work. According to him, their fewer years of experience should not deny them the chance to work on bigger projects. They could always bring a different approach or perspective to the table.

Fortunately for him, he got his chance early on. Being inspired by the likes of Ravi Udyawar, Bruno Aveillan and Adam Berg, like most creatives, Ramnathkar too wishes he had done a lot of the work which inspired him. Among these are P&G’s ‘Tribute to Moms, hardest job in the world’, Louis Vuitton’s ‘A Journey’ and SHM’s music video ‘Leave the World Behind You’.

Ramnathkar is fond of all the projects he has worked on. But two of them hold a special place in his heart. His first work with a big budget production was Integriti for which he went to Prague.

“What I enjoyed most about this film was that I was given a lot of freedom to experiment during the shoot and in the edit as well. I was overall extremely happy with the outcome. Kala Ghoda (My Art Beats for Mumbai) started off as a design and stop-motion experiment, but eventually unfolded into a very modern and different film. All about direction and editing, it reflects the art, music, culture, history and spirit of Mumbai city,” he remembers.

The young filmmaker's big win this year came during mid-March when IAA hosted the Olive Crown Awards. The International Advertising Association chose his video ‘A big thank you to Global Warming, now every country will have its own Venice' for this year's Green Award.

“I was anxious that night but more than that, I was happy to be in the same room as Mr Amitabh Bachchan! He is one of the stalwarts of Hindi cinema who I want to work with,” says Ramnathkar. He adds that he finds it commendable how the Olive Crown Awards are using the powerful medium of advertising to propagate such an important message as environment protection.

The video 'A big thank you to Global Warming' starts off with beautiful visuals of Venice. It thanks global warming because now every country has a chance to have its own Venice. It then moves on to take pot shots at the people who cause it including those with big cars, people who waste water, electricity, etc.

The campaign gained him admiring glances from a lot of the creative bigwigs present that evening at the IAA Olive Crown awards function.

Ask him what he wants to do and he promptly says he wants to keep making more such movies. “I want to create films that would be remembered and talked about by my audience. One day, like every filmmaker in India, I aspire to direct a Bollywood feature film. I would also love to work with an international filmmaker just to understand the difference between the process at home vs the one abroad.”

He feels that the industry is currently doing a lot of amazing and interesting work. There are many talented directors and creative people out there, which results in a lot of healthy competition. Everyone is pushing themselves to create something new and fascinating that probably hasn’t been done or seen before.

“A few years ago, when I was in college, I remember seeing just 3-4 directors doing stylized and look-based films. But now, with access to international DOPs, production designers, stylists and so on, there is a lot of exposure and scope to think as well as work out of the box. This has led to tremendous improvement in areas of styling, make-up, creative as well as post-production in our country, resulting in great, stylized films. Also, I think clients have become more aware of the impact of social media now. Which is why many of them are shifting their focus away from TV and are investing more in creating virals.”

As a parting advice, he says that to crack it in this industry, “one needs to have his own style and be different from the rest”.

“Be passionate about every bit of filmmaking be it casting, the colour and texture of the upholstery, the border of a sari or something as little as the eye shadow. In short, give every film you do your 100%,” advises Ramnathkar.