Portfolio Night rocks Mumbai as a new ‘All Star’ is found

Hosted by Lowe Lintas, the 12th edition of the global event saw Bangalore’s Mayank Bhayana winning the ‘All Star’ title 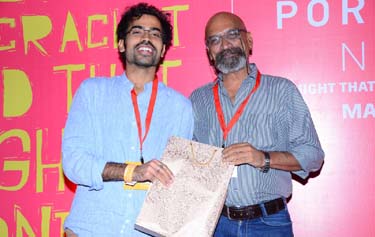 Portfolio Night rocks Mumbai as a new ‘All Star’ is found

Hosted by Lowe Lintas, the 12th edition of the global event saw Bangalore’s Mayank Bhayana winning the ‘All Star’ title

Portfolio Night 'All Star' winner Mayank Bhayana recieves the award from Chax. Click on the image to enlarge

Wednesday was one of the biggest nights in the life of many youngsters hoping to make it big in advertising. It was the night to 'crack' the top bosses. In its fifth year in Mumbai, the 12th Portfolio Night, held at Four Seasons in Mumbai, was hosted by Lowe Lintas & Partners.

Portfolio Night, one of the largest global events of the advertising industry, was started in 2002 by ihaveanidea. The annual event sees top creative talents in advertising come together to review the portfolios of students, juniors and creative aspirants. The event is held on the same date in more than 20 cities all over the world every year.

Hosting it again after the 10th edition in 2012, Lowe Lintas pulled it off in style, roping in the who's who of the ad fraternity as jury.

The long night belonged to Bangalore's Mayank Bhayana who was finally chosen as the ‘Portfolio Night All Star’ from India this year. Working in the ad industry for a couple of years, Bhayana feels that it was a wonderful experience.

“I have been reading about them (the jury) and their work for years. The opportunity to meet them finally has made this night well worth it. Would I say the same thing had I not won? Yes, absolutely! The win doesn’t matter as much as a chance to meet these advertising greats,” said Bhayana.

“I have always been a fan of Portfolio Night. It is not just about spotting great talent and mentoring them in the right way, but also a night for all of us to meet each other. And for people who want to get into the industry, what better way to do so than this one night where you get almost an hour to talk to the best minds in the industry?” commented Arun Iyer, National Creative Director, Lowe Lintas.

While the jury checked the portfolios, the shortlisted participants were interviewed by Piyush Pandey, Executive Chairman and Creative Director South Asia, Ogilvy & Mather, to select this year’s PN ‘All Star’ from India.

“It is a good opportunity for young people to learn and see where they stand in the whole picture. If they are actually passionate about advertising or not, and whether they should be in this field at all can all be decided tonight,” said Piyush Pandey.

Participation this year grew to a total of 75 participants and included people from all walks of life – students, engineers, advertising newbies, etc. Their work was judged by 25 of the biggest creative directors of the country.

“It's a mixed crowd, you know, with some of them being not so good, some at par and a few quite up there. I am already considering hiring someone but considering that the work they have shown, they might even get better offers,” commented Ashish Chakravarty, Contract’s NCD.

As always, the participants were divided into three batches and each participant then got the opportunity to get his or her portfolio reviewed by three jury members. Each creative director gave 15 minutes to the three candidates individually and reviewed their work, offering them advice and criticism where necessary. Touted as the ‘speed dating service for advertisers’, those 15 minutes could literally make or break a young participant’s future.

Lowe Lintas ECD Shriram Iyer said about the standard this yeae, “Some of the portfolios were really good, while some others were not so good. Incidentally, most of the digital work stood out in comparison to the same person's print or

TV ideas. That might be because those things have already been taken or done in TV, radio and print. But I do wish some of the brighter ones had come more prepared, with more practical and do-able ideas."

Like last year, the All Stars from all the cities where Portfolio Night was held would now be flown to New York to work on a secret brief from an actual client.

Other than the All Star, another participant was also given the opportunity to intern with OLX.in for three months.