The show will be replacing Roadies XI and will be aired every Saturday at 7PM, starting May 24 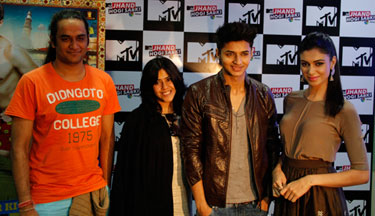 The show will be replacing Roadies XI and will be aired every Saturday at 7PM, starting May 24

Youth channel, MTV India, along with Balaji Motion Pictures has announced the launch of a new show, ‘MTV Jhand Hogi Sabki’, where celebrities will turn pranksters. ‘MTV Jhand Hogi Sabki’ will be replacing the channel’s No. 1 show in the non-fiction category, Roadies XI, and will be aired from May 24. The show has been drafted in a five-part, half-hour format to be aired every Saturday at 7 PM.

Celebs will be seen pulling pranks on their friends and colleagues with the use of hidden cameras to capture their reactions. Vikas Gupta, Programming Head, MTV India, said, “Balaji Motion Pictures wanted us to do something for the promotion of their upcoming film ‘Kuku Mathur Ki Jhand Ho Gayi’. But we decided to take it to one step further by launching this whole new show ‘MTV Jhand Hogi Sabki’. The reason why we could take this step is because MTV has always gone into territory which is experimental in nature. Our previous show, ‘Haunted Weekends with Sunny Leone’ during the launch of Ragini MMS 2, did exceptionally well.”

Gupta further said, “This show is basically an attempt to revive our popular MTV Bakra. While Bakra was of a smaller magnitude, MTV Jhand Hogi Sabki promises to be big as it as it has celebrities on board. The show will present fun and amusing pranks pulled by Bollywood celebrities on their friends from the film industry. Fans are always keen to know more about the lives of celebrities and especially how they react to certain situations.”

When the first sneak peak video from the show – ‘Shraddha Kapoor stabs stuntman’ – was released on YouTube, it went viral in so time, with more than 4 million views in less than 24 hours. It left viewers wondering if it is yet another cheap publicity stunt or in real.

“The word ‘jhand’ is a North Indian term, but getting associated with the film ‘Kuku Mathur Ki Jhand Ho Gayi’ will make it more mass centric. The greatest challenge for us was to tap the celebrities. First, they had to be available, and second, they had to be someone to whom our target group (12-25 years) would look at. This show will see celebs such as Varun Dhawan, Siddharth Malhotra, Anu Malik and Ekta Kapoor spinning their evil plans to prank their friends,” informed Gupta.

The show will be supported by 360 degree marketing campaign and will be promoted across all social media platforms.