In a span of 11 months, with this stupendous achievement, the popular weekend show on Colors has become the first Indian TV programme to achieve this feat 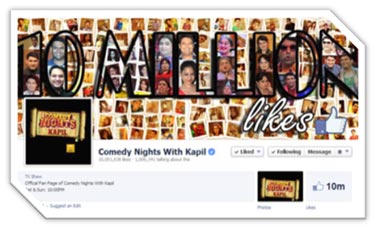 In a span of 11 months, with this stupendous achievement, the popular weekend show on Colors has become the first Indian TV programme to achieve this feat

The team of Comedy Nights With Kapil couldn’t be more ecstatic. Within a span of less than 11 months, the show has earned 10 million fans on Facebook! This milestone was reached on the evening of May 22, 2014.

To have become the first ever Indian television show to achieve this milestone only goes to prove the humungous popularity of the programme not only in India but across the globe. Tirelessly entertaining people for almost a year now and delivering hilarity unlimited, Comedy Nights With Kapil today has earned social media admiration beyond words.

The Comedy Nights With Kapil Facebook page was launched soon after the show’s on-air launch last year and has seen some phenomenal growth with more than 80,000 fans getting added every 24 hours. The show enjoys worldwide appeal with majority of fans based within the Indian sub-continent (India, Pakistan, Nepal and Bangladesh). It also has a strong male skew with 70 per cent of fans being males and 41 per cent of overall fans being men between the age group of 18 to 24 years. A typical Kapil Sharma joke and the wisecracks by his wacky family get shared about 10,000 times and generate more than 1.5 lakh ‘likes’. In fact, thanks to the craze of the show, Kapil’s personal Facebook fan page has more than 10 million fans already, beating the fan base of stalwarts like Shah Rukh Khan and Akshay Kumar. Now even the show’s fan page is following the suit.

To mark this epic accomplishment, Colors has etched out an extensive plan to ensure more participation. The channel started with a contest – Want to be a part of the '10 Million Likes' celebration on Comedy Nights With Kapil? – in which fans were asked to mail their best picture on colorstv.fans@gmail.com to see themselves on the cover picture of the Comedy Nights Facebook Page. Next up, was a countdown app which got activated the moment the page hit 9,900,000 fans! Once the 10 million mark was crossed, video messages by Kapil, Palak, Daadi, Sumona and Navjyot Singh Sidhu were posted to acknowledge the relentless love of the fans across the globe and making this landmark achievement happen.

The show enjoys a huge demand across other social media and digital platforms. On YouTube it is the most popular show on the ColorsTV YouTube channel since it was first launched. On an average, an episode posted on YouTube receives about 1.8 million views. On Twitter, every key character from the show including Kapil Sharma, Kiku Sharda (Palak), and Navjot Singh Sidhu have witnessed a phenomenal increase in the number of followers since the launch of the show. The Comedy Nights With Kapil mobile app also witnesses an average of 1.5 lakh downloads every month enabling the consumption of not only full episodes but also episodic mini-clips.

Vivek Srivastava, Digital Head, Colors, said, “Comedy Nights With Kapil has a very healthy fan following on social media and other digital platforms. This is an outstanding achievement for the show and the fact that this growth has come in less than a year is what makes the milestone even more exciting. Since the launch of the FB page we have been continuously focused on increasing interactions with our consumers. On an average a Comedy Nights post gets around 10,000 shares and generates more than 1.5 lakh likes, making it one of the most engaging entertainment brands in the country. We hope that the show continues to entertain audiences, providing us with more avenues to engage viewers on a continuous basis.”

Kapil Sharma, creator and producer of the show, commented, “Our heartfelt thanks to everyone who ‘likes’ our page and shares our content with their friends. It’s a signal of approval from the viewers on social media all across the globe that we are creating a product which people love to watch not only on TV but also consume it on other digital platforms like Facebook, Twitter, YouTube and the mobile app. Though we keep hearing people saying how much they love our show but to see it in a number as big as 10 million sends a loud message to us. In successful collaboration with the Colors team and continued support from our fans, my little hobby of making people laugh has grown into a flourishing content on television, one that I will strive harder to better even further.”