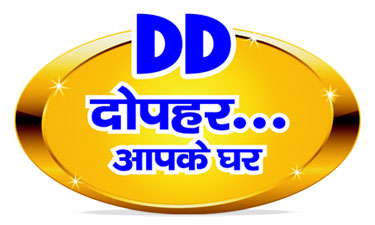 DD National is bringing a slew of new programmes in its mid-primetime slot, from 12 noon to 3 PM. Under the leadership of Director General Tripurari Sharan, DD National has begun its revamp with a dedicated slot for afternoon shows of all colours, genres and emotions, called ‘DD Dopahar...Aapke Ghar’, which kicked off on March 31, 2014.

These serials are produced and directed by bigwigs from television fraternity, like Harry Baweja, Karan Razdan, Paintal, Sudhir Pandey, Maninee Dey, to name some. The shows have some well known names and faces from the television industry.  Forming an attractive bouquet, the serials are being showcased by DD National back to back, leaving no space for the content hungry viewers to even take a breath in between.

Sharan said about the new programming strategy, “We are bringing in good programmes that are entertaining as well as socially relevant. With these new mid-primetime shows, Doordarshan is all geared up to engage viewers by serving them a complete package, while fulfilling its role as a public service broadcaster.”

The shows have a sprinkle of varied genres ranging from family drama, social drama, romance to sitcoms, where issues like women’s empowerment and gender equality have been given a unique place. The DD Dopahar shows that aim to capture the heart and mind of Indian viewers are ‘Amrita’, ‘Lakeerein Kiismat Ki’, ‘Ghanteshwar Prasad Ghantewale’, ‘Chitthi Tere Naam Ki’, ‘Anudamini’ and ‘Yeh Shaadi Hai Yaa Sauda’.

It will be a non-stop entertainment bonanza with this bouquet of six shows which have set the pace of DD’s new look and package, with a promise to bring in more surprises in the coming months.

Sharan further said, “As we are aware of the viewership base during the targeted mid-primetime, we are well equipped and ready with our new shows to hit the right chords at the right time.”

Amrita - 12:00 PM: It is is a heart-warming story of a widow, directed by Karan Razdan. The tale revolves around her obstacles of facing the cruel world and how she succeeds in the end. Watch out how Amrita personifies the saga of an Indian woman.

Lakeerein Kismat Ki - 12:30 PM: Directed by Paintal, Lakkerein is a story of Asha, a honest lawyer and Sohanlal, her father. It is a saga of human emotions, of family ties, of circumstantial upheavals, of the weak fighting the strong and emerging as the winner.

Ghanteshwar Prasad Ghantewale – 1 PM: Ghanteshwar Prasad brings with him ladles of emotions, cups full of humour and a palate of wholesome entertainment.  It’s an entertaining sitcom with Sudhir Pandey playing the lead, staged in a ‘Halwai Ki Dukaan’.

Anudamini – 2 PM: A family drama, with turns and twists, showcasing how Indian parents marry off their daughter’s without focussing much on their education and well-being.