McCann Health creates a campaign inviting the public to participate, contribute and vote 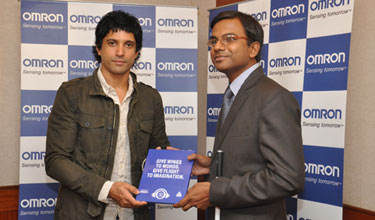 McCann Health creates a campaign inviting the public to participate, contribute and vote

Omron Group has launched 'Your Voice, Their World’ as part of their CSR initiative. Conceptualised by McCann Health, the project looks to create the world’s first-of-its kind online audio library of poems for the visually disabled in association with the National Association for the Blind (NAB), Delhi.

This is not the first time that Omron has done something like this. The company, in December 2013, had focused on creation of an Accessible Digital Library for blind students at NAB. This current phase will focus more on engaging the public at large in order to create a library of poems in the digital world. This CSR activity is closely directed by their philosophy of working for the benefit of society, and is an effort to further strengthen the company’s support to the visually impaired to help them fulfil their dreams of education and overall development via audio-based accessible content.

Takuichi Shimizu, President, Omron Management Centre of India, said, “Believing in the untapped potential of ‘human voice’ based education tools for the visually impaired, the bohemian campaign has a fresh appeal to enthuse people to do their bit towards this relevant cause in an interesting and simple manner. We believe that it will certainly be helpful in contributing towards the cognitive and social development of the visually impaired and, above all, in helping them enrich their lives.”

Prashant Ranjan Verma, Joint Secretary, NAB, Delhi, said, “Education based on accessible formats is one of the most effective tools to help the visually impaired people become more capable, financially independent, better human beings and a part of the mainstream. Taking this thought forward, we started production of audio and e-books with the support from Omron. Believing that visually impaired people have the same needs of ‘edutainment’ as any other normal human beings, this online initiative is the next level focusing on creating a database of meaningful poems which unfortunately, so far, has been a largely ignored domain.”

The campaign will reach out to people through various touchpoints which include a website, Facebook page, Android and iOS apps as well as YouTube videos. Each of these platforms has the facility for people to record poems in their own voice - either a poem of their choice or one from the database.

So far over 1,700 poems have been submitted with the first one being written by Prasoon Joshi and read out by Omron ambassador Farhan Akhtar. Omron is hopeful of keeping the momentum alive to create a meaningful collection of around 3,000 poems by May 2014. All the poems submitted are available for voting. The first phase of the campaign has been met with an overwhelming response with over 33,000 visitors to the website, a 20 per cent increase in the number of Facebook fans, massive growth in Facebook reach to 3 million, more than 100 per cent rise in Twitter followers, and more than 128,000 views of the campaign videos on You Tube. The contestants with the highest votes were also invited to meet Akhtar at an event recently.

Prasoon Joshi, CEO & Chief Creative Officer, McCann Worldwide India & South Asia, said, “To run a campaign with poetry at its heart and to serve the visually impaired through it is a unique opportunity and I was more than happy to pen a poem to get this kick started. Omron is a valued partner for us and I am glad that we have partnered with them to steer such a novel initiative.”

“The visually impaired pay more attention to what their other senses can tell them and our idea was to serve this reality. It’s a beautiful idea and we are proud to be part of it,” said Sohan Shah, Senior Vice-President, McCann Health.