According to TAM data, 74% per cent of Hindi news television viewers in India were watching the show at one point of time 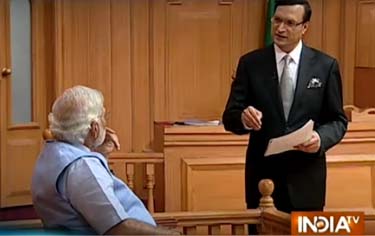 According to TAM data, 74% per cent of Hindi news television viewers in India were watching the show at one point of time

Narendra Modi in Rajat Sharma's Aap Ki Adalat on India TV. Click on the image to watch the promo.

Narendra Modi featuring in Aap Ki Adalat – Special Episode broke all TV news viewership records. The Saturday, April 12, telecast of the show on India TV got an all-time high market share. According to TAM data for Week 15, 74 per cent Hindi news television viewers in India were watching this show at one point of time.

As per TAM data sourced from subscribers, for the two hours when Aap Ki Adalat with Narendra Modi was aired from 10 PM to midnight on Saturday, the total TVT (000s) generated by the Hindi news genre was at 3,135, whereas India TV alone contributed 2,036 TVT. Topping the charts with 65 per cent relative share, India TV alone doubled the entire Hindi news genre put together.

On the stickiness front, India TV measured in at more than six times than the nearest competitor with 37 minutes of Time Spend per Viewer during those two hours.

Even on YouTube, Aap Ki Adalat with Modi has been a huge hit, clocking 1.78 million views globally till now. #modikiadalat was trending as world’s No. 1 on Twitter while the telecast was on.