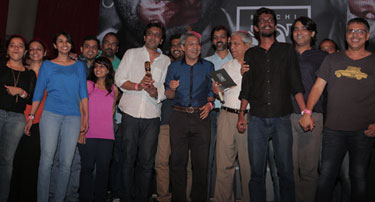 If you thought radio advertisements were dead, think again. The 11th edition of the Mirchi Kaan Awards once again brought creativity to the fore and reiterated the fact that radio is not only a growing medium but also an emerging space for advertisers in India.

Creative explosion, madness and laughter took place when the geniuses of the advertising fraternity came together and the best radio ads and their creators were honoured at an event on April 17, 2014 at Blue Frog, Mumbai.

"I have been judging their work for a very long time. But, somehow, this year I felt that other than the ones which have received the awards, there weren't many good entries. Though as a whole, radio has grown so much. When I started, radio was just Prasar Bharati and AIR. Now with FM, it is so much more fun; people can get instant feedback, etc. Even the digital wave has brought about a positive change, with digital radios coming up. So radio advertising surely has a very bright future," Rekha Nigam, former senior VP, Sony, commented.

The awards ceremony was hosted by stand-up comedian Varun Thakur who kept the spirits high and the crowd in splits. Stalwarts from the ad and the corporate industry such as Josy Paul, Pops, Sajan Raj Kurup, Rekha Nigam, Sunil Lulla, Sanjay Tripathi, Gaurav Seth and Sripad Nadkarni attended the event.

“The Gold category this year was exceptionally good; however, I felt that there are some exceptionally good radio advertisement campaigns which haven’t made it and they need to be shown here,” Tapas Sen, Chief Programming Officer, Radio Mirchi, said.

"It feels lovely to be appreciated like this. I guess it shows that when you truly love something, it will come across in your work. And we like working with the audio medium. Every project of ours is something we hold dear to us, and especially for something like radio," said Manish Bhatt, Founder-Director, Scarecrow Communications.

"I think the number of entries this year has gone down, but it is nice to see quality work. I think radio advertising has only one way to go – forward. I am very optimistic about it," said KV Sridhar, aka Pops.

Nitco Ltd was honoured with ‘Client of the Year’. Sounds Good Production won ‘Excellence in Production’ while Madison Media Pinnacle won ‘Best use of Radio as a Medium’ for Cadbury Celebrations – Songs for Sisters campaign.

If you have missed attending the award ceremony, catch the telecast on April 26 at 8 PM on ET Now.