From Profit to Prime, NDTV launches India's first 2-in-1 channel

The new channel which already has sponsors on board will be showcasing genres like Tech, Auto, Property, Education, etc 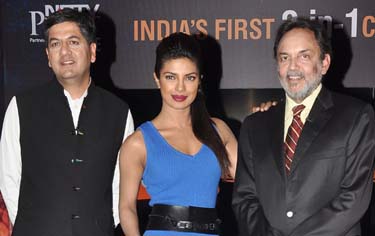 From Profit to Prime, NDTV launches India’s first 2-in-1 channel

The new channel which already has sponsors on board will be showcasing genres like Tech, Auto, Property, Education, etc

Making the most of the day is what television channels strive to do. And NDTV has taken another step towards that. The channel formally launched India’s first 2-in-1 channel – NDTV Profit and NDTV Prime – on Sunday, March 16, in Mumbai. The concept is simple. NDTV Profit, along with NSE, will show the big business and stock market news and analyses on weekdays from 9 AM to 5 PM. After this, it would switch to NDTV Prime, a youth oriented channel which will feature shows on cars, technology, comedy and more.

Dr Prannoy Roy, Co-Chairperson, NDTV, said, “This is perhaps one of the most creatively exciting new ventures NDTV has launched, with so many 'firsts' for television in India. The reactions so far from advertisers and sponsors have been very, very positive. This new concept, with two prime times, changes many of the traditional views on what primetime viewership is all about.”

Roy added, “The idea was two primetime channels - entertainment at night and business in the morning. We have been working on this idea for two years or so. And we already have sponsors on board, some for one year, some for two, etc.”

NDTV Prime has been brought in with association by Micromax. Targeting the 25+ urban male, NDTV Prime will have specific bands to entertain including technology, auto, property, education & careers, entertainment and comedy. In a first, the channel already has sponsors on board partnering with the genres that fit in with their brands. Videocon d2h has come on board for ‘Ticket to Bollywood’ while Croma is the overall Technology band sponsor. MRF is on board for the Auto band and Supertech continues its association with the Property band.

The genre division will be such that career and education shows will be telecast at 6.30 PM, followed by property (7-8 PM) and technology (8.30 PM). At 8.30 PM every weekday it would show auto shows for half an hour, followed by entertainment and comedy for half an hour each. From 10.30-11.30 PM it be movies. NDTV Prime will also be functional on weekends when stock markets and usual businesses are closed.

Rahul Sharma, Co-founder, Micromax, said, “Micromax has always looked at unique partnerships that bring alive newer experiences for Indian audiences through our brand associations and product offerings. We are very happy to partner with NDTV for their new and exciting venture NDTV Prime, India's first dual channel, a new infotainment channel that will reach out to newer audiences through great content across different genres. With digitisation and advancement of technology, we are seeing a trend for greater consumption of high quality content among viewers. NDTV Prime provides an ideal opportunity for Micromax to reach out to evolved viewers through new programming on lifestyle, reality, automobiles, sports, music, property, gadgets & gizmos, and comedy, all of which are showing increasing acceptance among Indian viewers. Our best wishes to NDTV, and we look forward to a long-term association.”

The channel has also released a campaign for the new 2-in-1 channel which features Shah Rukh Khan. Showcasing the dual roles the channel plays, SRK will also have a double role in this campaign titled ‘Work Hard, Play Hard’.

Vikram Chandra, Group CEO, NDTV, said, “In the digitised word, where viewers surf channels using EPGs, appointment viewing has become very important. NDTV Prime gives everyone full clarity on when they can see their preferred genre of programming. So property comes on at 7 PM.  If you are a gadget enthusiast, you can see that programming every night at 8 PM, auto programming is at 8:30 PM, and then there is entertainment at 9 PM. Of course, many viewers may choose to simply switch on the channel and leave it on!”