MediaCom wins Agency Network of the year and Best Communication Strategy award, PHD wins in Best use of mobile category 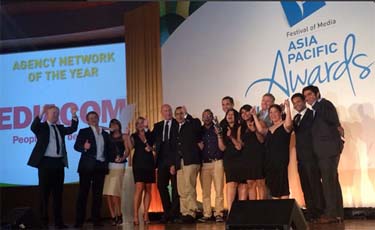 MediaCom wins Agency Network of the year and Best Communication Strategy award, PHD wins in Best use of mobile category

Designed to focus on the media elements of the Asia Pacific marketing and advertising industry, The Festival of Media Asia Pacific in its third year announced the winners of 2014 Award. Around 700 delegates from over 25 countries attended the three days of the festival which included the awards celebrating the best of creative work from across the region. Singapore's luxurious Capella was host to the Festival of Media Asia Pacific Awards 2014 on Tuesday, March 18.

Among the big winners from India was MediaCom which was named the Agency Network of the Year. With 4 shortlisted campaigns, MediaCom boasted of the highest nomination tally from Indian agencies.

MediaCom also won in the Best Communication Strategy category for the “Gillette Shave or Crave” campaign.

Debraj Tripathy, Managing Director, MediaCom India said, “We are delighted with the win at the Festival of Media Asia. The Gillette ‘Shave of Crave’ campaign was part of the series of very successful and much awarded campaigns run over the last few years, through which women influence and persuade men to shave.”

PHD won in the Best use of Mobile category for the Brooke Bond Tea Good Life Club campaign.

Incidentally, India had 12 shortlists in the awards this year including four for MediaCom, three for Mindshare and two each for PHD and Madison Media Infinity. HUL had one shortlist as well, in the Best Communication Strategy category.

The Campaign of the Year award went to Driving Dogs by FCB Media from New Zealand. They also won in the Best use of Content category and was Highly Commended in the Best Communication Strategy category.

UM Australia won the 2014 Agency of the Year award, also scooping Best Entertainment Platform for ‘Lambnesia’. MEC (Australia) was awarded the best launch campaign for Optic White's Must Have Whitening.

UM Malaysia won the Consumer Research Award for ‘Smiling is an Act of Charity’- LISTERINE Rides on a Cultural Insight’. The newly introduced Record Breaking Brand Award went to Sohu IT and Vivo Xplay.  The new award category, which is launched in collaboration with Guinness World Records, was introduced this year as part of the organisation’s partnership with the Festival of Media Conference and Awards series.