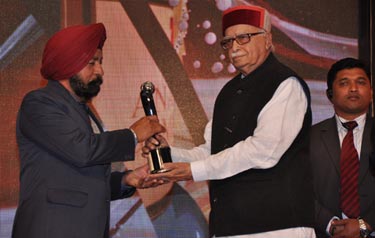 In line with its five-year long tradition of acknowledging and recognizing the contribution of military and paramilitary forces, Zee News, part of Nations largest news Network Zee Media Corporation Ltd. felicitated the heroes of the nation with ‘Ananya Samman 2013’. This year Zee News honoured the personnel from forces, who have done remarkable work for our society. Param Vir Chakra Awardees were also honoured.

Ananya means exceptional and Zee News believes in honouring those men who dedicated and sacrificed their lives defending the nation and also honouring their families who feel their loss every second of their lives.  Conceptualized in 2008, following the milieu of 26/11 Mumbai attacks, the Zee News “Ananya Samman” recognizes and salute the exemplary courage and valour shown by the real heroes of India in thwarting the attacks by foreign and domestic infiltrators.

Speaking on the occasion, Mr.  Alok Agrawal, Chief Executive Officer, Zee Media Corporation Ltd. said, “We respect Indian Armed forces who relentlessly guard the Nation, be it on the borders or at the time of internal crises.  Zee Media as a responsible Media House understands its duty and feels proud to honour their unconditional support and dedication. Today, we take this opportunity to commemorate the brave army and para –military forces that protect our motherland”.

Mr. Sudhir Chaudhary, Editor, Zee News said, “Being the oldest and the most responsible news channel we have enormous duties towards the Nation.  We understand our role and through Ananya Samman we honour and acknowledge the great work done by the ‘Heroes of the Nation’ and share their exemplary acts of courage with millions of viewers. It’s our way to give back to society.”

The “Ananya Samman 2013” felicitation ceremony commenced with an introductory speech. After the speech, felicitation of the real heroes begun along with an AV on their act of courage. The event also featured some patriotic songs by the artists and concluded with a Vote of Thanks. Before the final conclusion Army Band presented National Anthem.

Enclosed please find the names of the brave men, who dedicated their lives for the nation.