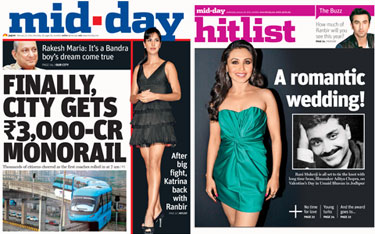 The Jagran Group has announced that its publication, MiD-DAY, a leading afternooner, was being launched in a new avatar with the aim of further enhancing the reader experience. The new look and positioning – “MiD-DAY - Made in Mumbai” – was unveiled at a glittering event in Mumbai last evening. The all new MiD DAY will be available on stands starting today.

Changes in the new MiD-DAY begin from the masthead itself. The compact logo has been expanded for bolder appeal. Additionally, a significant re-engineering of the content strategy has been put in place to augment the publication’s raison d’etre – the core focus on Mumbai city, Sports & Entertainment. The paper will be accordingly divided into four broad sections other than the Front page: Hitlist, Guide, Sports and Classified. All stories will have a short introduction and bullet points that highlight key elements of the story. Each page will have one lead story and several short stories in a column called the “Browser” that carries four to five short briefs on other stories. Factoids or quotes on the top of every page will add to reader interest and the density of news will be increased. An all-new addition will be the ‘Sunshine Page’ that focuses on positive stories of human goodness and fights against adversity.

Many cosmetic changes have also been included to enhance the navigability and readability of the paper. Given that many readers enjoy browsing through the paper during their commute to or from office, the font size has been increased to ease the reading experience. The visual look of the paper has been significantly improved and many stories are now pictorial. Spacing between lines has been increased, and to give the page a cleaner look and create a seamless, fluid environment through the different sections.

More graphics have been added for better storytelling, and the four different sections have been given covers – creating different environments within the paper. The paper is also now stapled as against different sections being bundled in earlier randomly. Each of the section covers have been designed to give an almost magazine like experience with a lead story and the inside story index on the cover page.

Vikas Joshi, MD and CEO of MiD-DAY Infomedia, said, “Mumbai city is renowned for its pace, way of life and its very strong culture of resilience. It’s a city that at times has been defined as so consumed by itself that it has created a world of its own within itself – the world of the Mumbaikar. MiD-DAY is the bridge that connects the Mumbaikar to his city and everything that defines the city. The “More Mumbai – More You” tag reflects the paper’s attempt to cover every aspect of a Mumbaikar’s life and create a great reader experience that is delivered in a very aesthetic manner. At the same time, MiD-DAY seeks to reclaim the boldness, the fearlessness, the irreverence, the edginess that has always been definitively MiD-DAY.”