If you ‘Got Style Get Famous’ with Fashion@Big Bazaar

Based on the insight that everyone has an inherent confidence in their own style and a latent desire to be noticed, DDB Mudra West created a campaign and engagement platform to enable customers get featured with cricketer Shikhar Dhawan 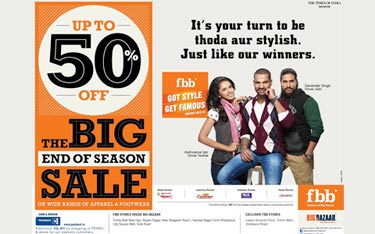 If you ‘Got Style Get Famous’ with Fashion@Big Bazaar

Based on the insight that everyone has an inherent confidence in their own style and a latent desire to be noticed, DDB Mudra West created a campaign and engagement platform to enable customers get featured with cricketer Shikhar Dhawan

Fashion at Big Bazaar (FBB) is synonymous with trendy fashion for the youth. Whether it was the popular ‘Des Badla Bhes Badlo’ slogan or the recent ‘Let’s make India Thoda aur Stylish’, FBB has always stood for making style accessible to everyone. It differentiates itself from other fashion brands by being democratic and social, as opposed to others which promise superiority through style.

With a new brand ambassador, Shikhar Dhawan, in tow, FBB is aiming to create visibility for the brand and drive walk-ins to its stores, and break the perception that style exists only on the catwalk.

Based on the insight that everyone has an inherent confidence in their own style and a latent desire to be noticed, DDB Mudra West created an engagement platform which could help the customers get featured with dashing cricketer Shikhar Dhawan. This led to the ‘Got Style Get Famous’ activity. Shikhar Dhawan was a natural fit for the brand as he epitomizes what FBB stands for – youth, exuberance, national appeal and confidence in one’s own skin.

A massive hunt for India’s most stylish was initiated in 14 cities. ‘Got Style, Get Famous’ was popularised through print ads in local and national newspapers, on social networking websites and through TVCs. All the ads featured Indian cricket’s poster boy and FBB’s brand ambassador, Shikhar Dhawan.

“Our brand always believes that the youngsters of this nation have immense potential; it is just a matter of providing them a good platform. ‘FBB Got Style Get Famous’ was one of those solid platforms which encouraged youth to showcase their style statement. We couldn’t have asked for any one better than the dynamic Shikhar Dhawan, the mass appeal which he has amongst the youth is amazing which was evident in the massive participation we have received,” said Akshay Mehrotra, Chief Marketing Officer, Big Bazaar.

The communication encouraged youngsters to visit a nearby FBB store and show off their style with FBB outfits and get a stylish picture clicked. Based on their style quotient, two winners (one male, one female) from each city were chosen. The 23 contestants (12 male + 11 female) were chosen from each city for the Grand Finale. The print ads announcing winners from the respective cities made the contest more popular. Final winners got a chance to model with Shikhar Dhawan for FBB 2014 campaigns and a one-year agreement from a leading talent management company.

Sanjay Panday, Sr. VP and Business Head, DDB Mudra West, said, “The idea behind the FBB Got Style Get Famous contest is to celebrate the sense of style of the ordinary Indian. FBB believes that style is not the exclusive domain of models on the ramp. In fact, every Indian has his or her own sense of style which is unique and the FBB GSGF contest personifies that the best.”