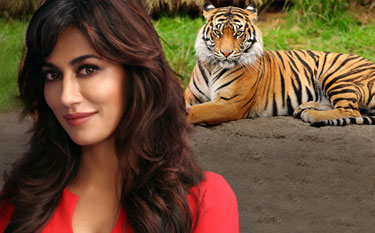 Animal Planet will bring the country’s attention on India’s majestic animal – tiger – with its special month-long programming initiative ‘Where Tigers Rule’. Bollywood actors Abhay Deol and Chitrangada Singh have joined the wildlife channel to create nationwide awareness on the threats to tigers’ survival and the acute role tigers play in balancing India’s ecosystem. The show will air every night at 8 PM from March 1 to 31, 2014.

With a few thousand tigers left in the wild, every small effort represents hope for their survival. From the breathtaking landscapes of Sundarbans to the magnificent forests of Ranthambore, ‘Where Tigers Rule’ provides an intimate look into the mysterious world of tigers. Featuring some of the leading tiger experts like Alphonse Roy, Valmik Thapar, Saba Douglas Hamilton, Dave Salmoni, Simon King, John Varty, Niall McCann, the programme showcases the elusive lifestyle of tigers and raises concern about the grave situation of the dwindling tiger population.

Rahul Johri, Senior VP and General Manager – South Asia and Head of Revenue, Pan Regional Ad Sales and Southeast Asia, Discovery Networks Asia-Pacific, said, “Tiger is a symbol of wildlife wealth of India and holds an irresistible fascination due to its secretive predatory nature.  Its dwindling population is a matter of great concern. Animal Planet through its dedicated programming aims to help viewers understand and appreciate this majestic and endangered big cat.”

Abhay Deol commented, “The tiger is a supreme predator and is an indication of the well-being of our ecosystems. Saving the tiger is not just a choice, it’s our need. I am hopeful that my association with Animal Planet will help raise consciousness amongst audience in securing the future of this beautiful animal.”

Chitrangada Singh added, “We are left with very few tigers in the wild and if collective action is not taken, the most iconic animal could be wiped off the planet forever. Animal Planet’s ‘Where Tigers Rule’ is a wonderful initiative that will sensitise viewers to understand the importance of this charismatic cat.”

Some of the programmes in the line-up include:

‘Swamp Tiger’ documents the life of the most elusive of cats – the Royal Bengal Tiger of the Sundarbans. Using elaborate night-sight equipment sensitive to moon and stars, the viewers will watch never-seen-before sight of a female tiger covering a carcass with leaves just before dawn and many revelations that follow.

‘Tigers Next Door’ takes a look at an intimate portrait of Sita, an Indian tigress, and her cubs in the forest of Bandhavgarh in Central India. The film analyses political changes sweeping across the nation which could mean a better future for the locals and tigers alike.

‘India - Kingdom of the Tiger’ is a historical epic depicting India from 1910 to the modern era. The film chronicles life of Jim Corbett, the famed English hunter-naturalist, as he races to save an Indian village from the terror of a man-eating tiger.

Naturalist and filmmaker John Varty and zoologist David Salmoni are the ultimate friends of these beautiful animals. ‘Living With Tigers’ follows their dynamic and ambitious programme which has been developed to reintroduce captive tigers into the wild.

‘Tiger, Hunting for a Home’ looks at some of the issues concerning the plight of tigers and how their existence or extinction impacts life around them.