Launched today in Ahmedabad, the 'NavGujarat Samay' is available at a cover price of Rs 3 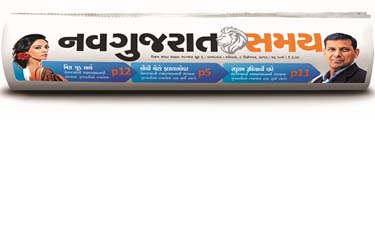 Launched today in Ahmedabad, the 'NavGujarat Samay' is available at a cover price of Rs 3

As part of its strategy to extend its footprint in the language market, The Times of India Group launched a Gujarati daily, ‘NavGujarat Samay’, today in Ahmedabad. The launch comes on the heels of a slew of successful launches like Ei Samay in Kolkata, seven new editions of Maharashtra Times (Pune, Aurangabad, Nagpur, Nasik, Kolhapur, Jalgaon and Ahmednagar), and one new edition of NavBharat Times (Lucknow) in the last couple of years.

The Times Group already has an astounding 95 per cent readership share in English dailies in the city. TOI Ahmedabad and Ahmedabad Mirror are already well-entrenched leaders in their category, both qualitatively and quantitatively.

NavGujarat Samay is positioned as a new voice for a new Gujarat. It is the voice of the new, progressive, optimistic and ever-enterprising Amdavadi who dreams big and aspires for global recognition and success.

Rahul Kansal, Executive President, The Times Group, said, “The Times Group is well-acknowledged as a thought leader in the English newspaper space as well as for its language brands – NavBharat Times, Maharashtra Times and Ei Samay. Now we are all geared up to achieve the same milestone in other languages as well.”

Ranjeet Kate, Director - Response, Bennett, Coleman & Co. Ltd (BCCL), added, “NavGujarat Samay will provide the right platform and context for advertisers to creatively engage the Amdavadis in their own language. With a ‘print plus’ approach and a whole lot of brand activations planned over the whole of 2014, NavGujarat Samay will usher in a new era of newspapers in Ahmedabad that will delight the readers and advertisers like.”

A modern, forward looking brand that is in tune with the evolving consumer media habits, NavGujarat Samay also focuses on the new age media that are especially popular with the ‘under 40’ readers. For instance, it is the only Gujarati daily that launches along with a wide array of digital platforms – apps, a WAP site and a website (www.navgujaratsamay.com).

NavGujarat Samay covers an indepth and a broad spectrum of business news and analysis targeted at fulfilling the needs of the business and entrepreneurial community of Ahmedabad. It is the bridge that leverages the Times Group network and provides the best of content to Amdavadis. It takes Ahmedabad’s perspective nationally to people who can make a difference.

The new daily has a premium, differentiated and modern design that packs in more quality news in a ‘slim’ format. The slim format has been developed basis consumer research, reflecting the trend of modern readers preferring sleek and smartly designed products.

The paper will contain differentiated advertising supplements that will provide the best in features, entertainment, trends and youth focused subjects with an objective to celebrate Ahmedabad with the zest and energy of the Amdavadi.

NavGujarat Samay has anothr innovative feature: 2 front pages in 1 newspaper. This is a first ever innovation in any daily in Gujarat, that delivers double the value for our Gujarati newspaper readers.