The TVC brings out the new colors, logo and philosophy of the news network 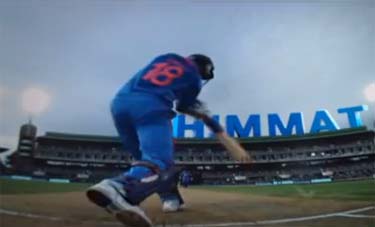 The TVC brings out the new colors, logo and philosophy of the news network

Zee Media Corporation has launched a new television commercial to popularise Zee News’s new look. With a show of vibrant new colours, the channel is aiming to establish that it is now refreshed, rejuvenated and recharged. This has been done in line with their intrepid philosophy, that ‘News is never black and white; there are many shades, many hues to news’.

The TVC will be launched across multi platforms like cross-GEC networks, multiplexes, etc., besides leveraging the Zee Media Corporation’s networks.

The TVC is a zestful film. It has a catchy jingle with cogitative lyrics. It features the new, emerging India in a nutshell, kick-starting with a scene of a young boy flying a kite. This is followed by a variety of vivid imageries, showcasing a mountaineer on the top of the Himalayas, soldiers marching in tandem, a spirited cricketer hitting a six in the midst of an electrified crowd, and ends with a man confidently waving the Indian flag on a mountain top. Along with these exuberant scenes, powerful words outlining the channel’s message and the mood of the country have been evinced in this film – ‘Junoon’, ‘Hauslaa’, ‘Himmat’ and ‘Sachai’ – clearly outlining the message that Zee News has always defined to its viewers through various forms of reporting and journalism.

Summing up this spirit, this commercial tries to capture a dynamically modernising and evolving India. This new generation, bristling with attitude and confidence, stays connected with the latest happenings all round the world through technology, and demands instant information and news at the touch of a button.

Zee News is committed to provide viewers with various aspect of news, which have been showcased in the TVC. The concept has been introduced for the very first time in Indian journalism. This will help Zee News stand out of the clutter and establish a niche in the news fraternity.

Rohit Kumar, VP, Marketing and Distribution, Zee Media Corporation, said, “With this revamp the focus is on the youth. As always, we have striven to stay focused and relevant. With this new campaign the objective is to influence youth and their conscience. Our attempt is to strike a chord with them, their thoughts and attitude through this campaign.”

The Zee news channels promise to perform and deliver, powered by its new, bold avatar. They aim is to strengthen their credibility, trust and resolve to be always on the side of the truth, through unbiased and faced-paced reporting and news coverage, 24x7.