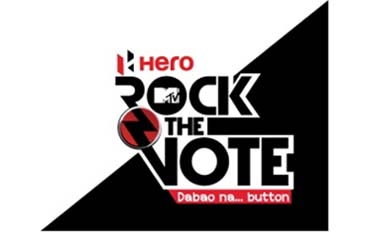 MTV, with its ‘Hero MTV Rock the Vote’ campaign, has sounded a wake-up call for all those of you who are above 18 years of age and have an opinion on things around them. MTV’s tongue-in-cheek tagline, ‘Dabaona ...button’, encourages first-time voters to vote. Breaking the usual monotony of long speeches, MTV will draw heavily from the three pillars of popular culture – Bollywood, humour and mjusic – to connect with the youth.

The campaign is supported by youth icons Rannvijay Singh and YoYo Honey Singh to encourage the young people to get to their nearest voting booths and vote. No force unites the generation as music; and music resides at the heart of MTV. MTV is closely working with YoYo Honey Singh to create a music anthem to support Hero MTV Rock the Vote. A crowd-sourced music video, the unique anthem will imbibe the essence of the initiative and revolve around the issues surrounding the youth.

Aditya Swamy, EVP and Business Head, MTV India, said, “Apart from playing a huge role in pop culture, MTV has always led young people in the area of social activism. Young people have the power more than ever to make a difference. Hero MTV Rock the Vote is a movement that aims to make young people aware of this power, and to act on their right to be heard. Our partnership with Hero is truly special as both brands are genuinely committed to working with the youth to build an even more incredible India.”

Singer-rapper YoYo Honey Singh said, “I have always professed taking my Indo-Punjabi music to the heart and soul of every Indian. With this supercool initiative, I will reach out to the youth and encourage them to cast their votes to bring about a change.”

MTV VJ and youth icon Rannvijay Singh said, “We all have an opinion on the way we would like to run the country. But you would not see many people take it upon themselves to bring that change. I think MTV Rock the Vote is a great initiative to urge the young guns to cast their vote and make their voices heard. It’s high time we take things in our hands and make the right choice to help build a better nation. So I am definitely going to vote, are you?”