Conceptualised by Publicis Ambience, the integrated brand campaign including a TVC shows brand ambassador Sachin Tendulkar in a new avatar 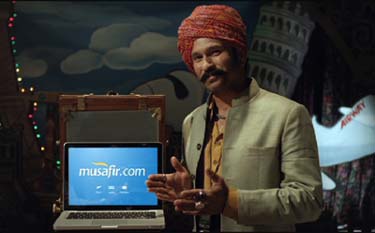 Conceptualised by Publicis Ambience, the integrated brand campaign including a TVC shows brand ambassador Sachin Tendulkar in a new avatar

Musafir.com, which recently entered the fast-growing Indian OTA market, has launched its first through-the-line brand campaign. In the latest television campaign, the company’s brand ambassador, Sachin Tendulkar, in a new avatar, is seen enabling aspiring travellers to ‘Go Ghoomne’ with the simple click of a button.

The company has launched an integrated marketing campaign across television, radio, OOH and digital. The campaign highlights the ease with which customers can travel to their dream destination with unmatched deals and offers on flights, hotels and holidays, thereby enabling them to ‘Stop dreaming, start travelling’.

The TVC has been conceptualised and scripted by Publicis Ambience and produced by Native Films. The film is set in a Rajasthani mela, where a mysterious photographer has put up a shamiana which has people lining up outside with their luggage. The main idea being that the shamiana is a metaphor for Musafir, which serves as the portal that transports you to your dream destination.

Sachin Tendulkar, sporting a moustache and a turban, is the mysterious photographer, the ultimate ‘Musafir’ (traveller) who urges people to pose convincingly next to the destination cutouts and transports them to the real destination. He is naughty and full of life, giving people various props, encouraging them to get into the moment. His costume of a traditional Rajasthani local accentuates the light humour and liveliness of the film.

The narrative is simple and the treatment has elements of popular folk culture. The jingle with a twist of folk music and English verses gives it a fresh and catchy appeal.

The TVC was released on YouTube on November 11, 2013, and has already received over 8 lakh cumulative views. The TVC went on air across Hindi and English genres starting December 5.

Manu Monga, Vice-President and Head Marketing, Musafir.com, said, ‘Travel in India had been reduced to a war of prices. We were clear that we wanted to bring the conversation back to the simple joys of travel, the sense of discovery, the promise of an unseen land beckoning, see the ‘traveller’ in a person rather than just a tourist, encourage people to travel more for all the right reasons and not just because of the prices. The brand has been presented in a way where it immediately strikes an emotional connect with Indian travellers. The word ‘ghoom’ strikes an instant connect with every Indian and this inspired us to conceptualise our brand campaign around the theme of ‘ghoomna’. The intent was to establish Musafir.com as a hassle-free travel portal for realising the travel aspirations of consumers. We are optimistic that our brand campaign will help us reach out to many more travellers across geographies and strengthen our position to be a preferred travel partner in India.”

Paritosh Srivastava, Head of the Mumbai office of Publicis Ambience, said, “Sachin Tendulkar as the brand ambassador was a huge creative opportunity for us. We were all clear that we did not want to use him as a cricketer but explore the quirky side of the brand through him. Sachin is a traveller at heart and immensely enjoys vacations with his family and was excited to be cast as a character in a film rather than the same old same old cricketer avatar that he dons in real life.”

Apart from the TVC, Musafir.com has branded all mobile chargers across the domestic and international airport terminals in Mumbai as part of the brand campaign. In addition, radio listeners in metro cities will get to enjoy the rendition of the TVC with its peppy jingle.

During the pre-launch phase, Musafir.com announced a social media contest titled ‘Guess the Musafir’. A pixelated visual of Sachin Tendulkar in the avatar of Shekhu Shekhawat was released online for consumers to guess who it was. Clever seeding coupled with hints, generated a lot of curiosity and conversations about the character. In addition, on Sachin’s 200th match, Musafir.com engaged 200 TAB cabs to provide free rides to fans to the Wankhede Stadium for five days from designated pick-up points spread across various locations in the city. Currently, Musafir.com is running a visual lead initiative socially to #shekhufy the world with a turban and moustache, based on the character that Sachin Tendulkar plays in the TVC.

Musafir.com was founded in the UAE by Sachin Gadoya, Albert Dias and Mohammed Al Thani in August 2007. The travel website offers flights to over 3,000 destinations around the world on over 270 airlines, domestic and international hotel deals at over 75,000 properties, and lots more.