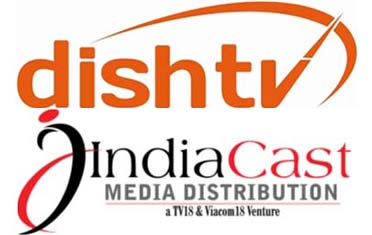 The spat between IndiaCast UTV and Dish TV began last month when the latter started a promotional offer for its subscribers in which it attacked IndiaCast UTV channels.

Responding to Dish TV’s promotional scheme that asked subscribers to SMS or call to opt for their desired channels from the IndiaCast UTV bouquet, failing which the subscriber would get 100 bonus points per unrequested channel which they can redeem against the movies-on-demand service, IndiaCast UTV issued a public notice on the same issue in leading dailies on Friday and started running promos on their network channels.

The public alert notice said: “The availability of 21 channels as part of your continued subscription is likely to be disrupted with effect from 1st January 2014 due to Dish TV offering their Movies on Demand instead of these channels. Therefore, it is likely that while you continue to pay the same monthly fees to Dish TV, some of your favourite channels like Colors, CNBC TV18, MTV, CNN-IBN, Disney and Nick (among other listed below) may no longer be available to you on Dish TV.”

The notice urged Dish TV subscribers to call Dish TV’s call centre numbers to continue enjoying these channels as part of their subscription at no extra cost.

The notice went so far as to suggest Dish TV subscribers to get a new connection from alternate service providers like Tata Sky, Airtel, Videocon d2h, Hathway, DEN and IN Digital.

Reacting sharply to the notice, Dish TV opted for legal action the same day. A spokesperson from Dish TV said: “Dish TV issues legal notice to Indiacast for false and malafide advertisement taken in leading dailies today. Dish TV today issued a legal notice calling upon IndiaCast to cease and desist from spreading false and malafide information regarding IndiaCast channels on Dish TV’s platform. All necessary steps including criminal and civil actions against IndiaCast UTV and its functionaries are being contemplated by the largest DTH provider in Asia.”

Speaking to BestMediaInfo.com, Anuj Gandhi, Group CEO, IndiaCast, said, “We haven’t received any legal notice but we are in the receipt of a letter. Our ad or notice is only to protect our interests against their promotional offer which they are running since November 15. Rather, our ad/notice intends to help them and their subscribers as it says the same thing Dish TV is communicating in its campaign.”

When asked about suggesting Dish TV subscribers to change services, Gandhi defends his ad by saying it is again in the interest of general viewers and Dish TV subscribers. “Right now, we have 21 channels which will be 36 from next financial year. That means a subscriber would have to call their call centres 36 times if he/she wants to get all our channels. Would any subscriber like to do it? Why one would not think to change service to get away from this painful process?” asked Gandhi.