Beginning December 2013, subscribers will now get a bill for their cable TV every month starting with that of November, 2013 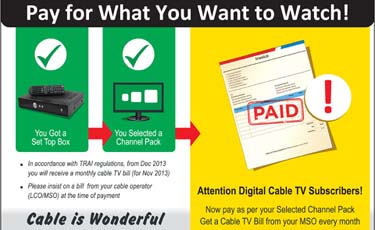 Beginning December 2013, subscribers will now get a bill for their cable TV every month starting with that of November, 2013

Digital Cable TV subscribers will now get monthly bills from their Cable Operators. The new facility, which has been introduced as per the Telecom Regulatory Authority of India’s (TRAI) regulations, will usher in greater transparency in billing.

The Union Government the TRAI had rolled out a 4-phased plan for digitisation of cable TV across India early last year. Phases 1 & 2 of this process covering Delhi, Mumbai, Kolkata & 38 other major cities have already been completed. According to the Ministry of Information and Broadcasting, over 26 million Set Top Boxes were installed in these cities, over 70% of which were by digital cable companies.

As part of a three-step strategy adopted by Multiple System Operators or MSOs, subscribers have got a Set Top Box and submitted their Know-Your-Client details and channel package selection. Beginning December 2013, subscribers will now get a bill for their cable TV every month starting with that of November, 2013.

Commenting on introduction of monthly billing, S.N Sharma, Secretary, MSO Alliance and CEO, DEN Networks said: “This move is important as it will ensure that there are no additional or random charges levied on the subscribers. Our viewers will thus pay only for what they watch and they must insist on a bill from their local cable operator or multiple system operator at the time of monthly payment.”

The MSO Alliance has also launched an advertisement campaign through print media and cable television channels to spread awareness about the monthly billing system.

As per the TRAI regulations, subscribers will get a time period of 15 days from the date of the bill to make their payment. In case the subscriber fails to make the payment after the expiry of the due date of payment, the MSO or the affiliate LCO (local cable operator) has the right to charge interest on the outstanding amount.