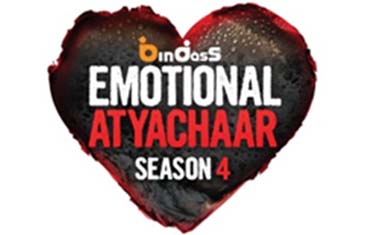 bindass’ cult show Emotional Atyachaar’s season 4 completes 50 successful episodes and is set to bring four special episodes on ‘Shaadi Mein Atyachaar’.  Across its multiple successful seasons, Emotional Atyachaar has showcased cheating within all kinds of relationships, for the first time the show will cover betrayal in one of the most important relationship in our society, Marriage.

Emotional Atyachaar has always been a successful platform for people who have been victims of infidelity, witnessing the encouraging response to the current season featuring a refreshed format; the show will feature instances of con, cheating and betrayal in marriages which is tantamount to infidelity.  Marriage, symbolizes an individual embarking on a new journey in life with their most trusted and loved companion, facing betrayal in such an important relationship leaves many shattered. The cult show will bring alive multiple cases of betrayal involving emotional cheating, frauds, dowry, NRI Marriages gone wrong and domestic violence, which certain brave hearts have managed to overcome.

‘Shaadi Mein Atyachaar’ – Dekho, Sikho, Bacho, will take the audiences on a stirring journey of emotions of those few women who braved the circumstances and came forward to tell their stories which can serve as an inspiration to many others.

“Emotional Atyachaar has always mirrored society and marriage is one of the most important relationships for most people in Indian culture. Betrayal in an institution like marriage is not limited to sexual infidelity but goes onto includes issues like, dowry, frauds and more. It has been our constant endeavour to candidly represent the realities of our society with sensitivity and as our show reaches a milestone to complete 50 successful episodes, we thought the time was right to showcase our viewers another facet of infidelity by featuring episodes dealing with such unimaginable situations in marriages”, says Shalini Sethi, Director Programming, bindass.

Pravesh Rana who has been the face of Emotional Atyachaar, will continue hosting the show and will take the viewers through the 4 episode special on ‘Shaadi Mein Atyachaar’. He will be seen interacting with people who have successfully battled troublesomemarriages involving infidelity, fraud, dowry and other baffling situations.

Talking about the special episodes on marriages which will be a part of Emotional Atyachaar, host Pravesh Rana said, “My journey with Emotional Atyachaar has been professionally fulfilling and a huge learning as I came across a lot of youngsters who have borne the brunt of infidelity. bindass will now showcase another aspect of betrayal in one of the most important relationships known to mankind, Marriage. On the completion of its 50th episode, Emotional Atyachaar will present its viewers with special content. Shaadi Mein Atyachaar will showcase stories of people who have come out as survivors after experiencing difficulties and troubles unknown to many.”