The OOH campaign by DDB Mudra focuses on key markets in UP, MP, Gujarat and Delhi-NCR 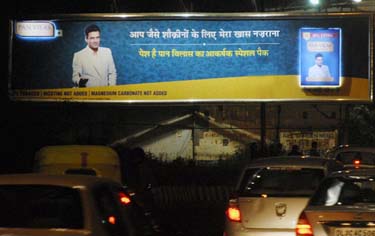 The OOH campaign by DDB Mudra focuses on key markets in UP, MP, Gujarat and Delhi-NCR. The idea behind the campaign was to keep it simple, effective and visually appealing and thus the creatives carried the new pack endorsed by Manoj Bajpai BestMediaInfo Bureau | Mumbai | November 19, 2013

Pan masala (mouth freshener) as a commodity in India has a customer base, especially in Northern India. For a brand which entered the segment as recently as 2010, Godfrey Phillips India has made a lot of headway into the market. Pan Vilas, its pan masala brand, was successful in striking the right chord with consumers and is the fastest growing pan masala brand in the country.

With a new price point for the Pan Vilas 1.7g pack, Godfrey Phillips had to reach out to the maximum number of pan masala consumers and build the brand imagery. An Out Of Home (OOH) campaign was created by DDB MudraMax, in tandem with radio and television spots, which was then launched across key markets in Gujarat, Uttar Pradesh, Madhya Pradesh and Delhi.

The idea behind the campaign was to keep it simple, effective and visually appealing and thus the creatives carried the new pack endorsed by Manoj Bajpai inviting the consumers to associate themselves with the special, new Pan Vilas pack at Rs 4.

Subhashish Sarkar, Sr. Vice-President, DDB MudraMax, pointed out, "The Pan Vilas campaign has been taking steady and sure strides across a variety of media in recent years, to entrench itself as the most recalled in category with clear communication, memorable brand endorsement and strategic message locations. For OOH, DDB MudraMax has strived to work closely with the brand team in delivering mileage in tandem with the rest of the brand delivery in all markets. Selection of media, astute buying and a slew of eye-catching innovations gain the Pan Vilas campaign a foothold above budgetary allowances.  We take pride and pleasure in our association with the brand."

What the brand needed to do was craft the communication in a way that is eye-catching and would help maximise awareness levels and the brand's 'top of mind' recall. The campaign was strategically planned in a way to coincide with the new price. The OOH activity was restricted to sites with large display area and situated in high footfall regions with heavy traffic coverage so as to maximise viewership.

Arnab Ghosh, General Manager, Marketing, Godfrey Philips India, said, "The OOH campaign was mounted to build salience for Pan Vilas across key markets and to create a buzz prior to the intended price change on the brand. The Initial indication on the acceptance of the new price point in most markets is positive. The entire 360 degree approach of which the OOH campaign was a key element seems to have worked in achieving the intended results, putting the brand in a better state of health. DDB MudraMax as a partner has been instrumental in working to a brief of providing the most optimised OOH plan for the key markets, which in the current situation of budgetary constraints was the need of the hour."

The OOH media plan criteria across cities had complete consistency in terms of where, what and how. Sites selected cover the entry/exit points to a city, heavy traffic junctions, high footfall locations, youth hangouts/recreational areas and high selling areas.

The extensive and highly visible outdoor plan has been executed across the major towns of Uttar Pradesh, Madhya Pradesh, Gujarat and key locations in Delhi-NCR region. The campaign duration across cities was for a period of 45-60 days.

Delhi also saw key locations with Pan Vilas logo and pack shot getting lit up. Prefabricated backlit boxes with LED lighting were put atop billboards at the key OOH sites at major traffic bottlenecks of the city -at Nehru Place and MG Road. Simple, yet visually appealing displays have been catching the eye of all commuters and generating quite a buzz.

Jagriti Kohli, Deputy General Manager, DDB Mudramax, said, "Good work always happens when the client and agency work as partners, with a clear focus to turn the brand challenge into an advantage. The Pan Vilas OOH campaign is testimony to this fact. The campaign in all cities stands out for its outdoor friendly creative as well as the large format and selected media. A thorough understanding of markets, strategic and relevant OOH media planning, backed by  flawless execution by a team which owned the brand completely made the Pan Vilas campaign a visual delight across markets. Word of mouth is the best medium of all, William Bernbach had said, and this campaign has generated that in abundance."