With a new logo and identity for the brand, campaign, conceptualised by Law & Kenneth, has been launched to show how holidays with Club Mahindra are for everyone 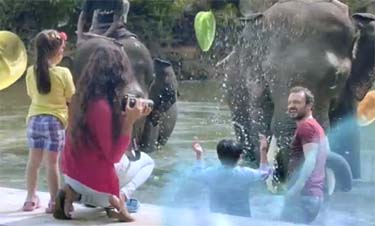 With a new logo and identity for the brand, campaign, conceptualised by Law & Kenneth, has been launched to show how holidays with Club Mahindra are for everyone

Club Mahindra - Mahindra Holidays & Resorts India's flagship brand - has unveiled a new campaign inspired by the idea of ‘Making Every Moment Magical’. The thought reflects the ethos of the organisation which strives to create magical experiences for the entire family during their holidays.

“When we launched Club Mahindra in 1996, the concept of vacation ownership was not only viewed with skepticism but was also relatively nascent in India. However, over the past two decades, Club Mahindra has done much to change that perception with its world-class properties and unique holiday experiences. The fact that we are India’s leading vacation ownership company with over 1,60,000 members is a clear validation of its success and this fresh new brand identity reflects its renewed focus on delivering the best vacations to its members across the country,” said Anand Mahindra, Chairman, Mahindra Group.

Incidentally, the group has also gone in for a rebranding. Inspired by Buddhist mandalas, the new symbol is a reflection of a brand that represents the best of Indian business and culture on the world stage. Club Mahindra’s new brand identity features a symbol made up of four hearts coming together. Inspired by the ‘colours of holidays’, the hearts are in vibrant shades of blue, yellow, orange and green. These hearts symbolise families and friends coming together. The new identity is flexible to adapt itself to all kinds of media especially digital. The identity has been designed by UK-based Daren Cook who has designed several other iconic logos as well.

“Club Mahindra has defined the vacation ownership category in India by continuously setting new standards. The 8th largest vacation ownership company in the world, Club Mahindra is evolving as the Indian consumer seeks newer holiday experiences. Hence, we are opening new resorts, have introduced a new online booking system and we have also introduced new experiences for families at our resorts. Our change of brand identity goes much deeper than just the change of symbol. The thought behind the logo change inspires us to deliver magical moments to our Members and encourages those who aren’t already with us to have another look at what we offer,” said Rajiv Sawhney, Managing Director & CEO, Mahindra Holidays & Resorts India.

The new marketing campaign is to support the brand identity for India's leading vacation ownership company. A set of three TVCs have been conceptualised by Law & Kenneth to bring this to the forefront.

The first TVC is called 'elephant bathing'. It opens with a man trying to teach his daughter how to ride a bicycle. The voiceover declares that a child's steps are like time – no matter how much you run after it, you can never catch up. The family is then shown to enjoy a nice holiday while bathing elephants and taking pictures. The voiceover declares that Club Mahindra gives people holidays in which time stalls for a bit.

The second TVC is called ‘family cricket’ and opens with an old couple dancing to a song when their grandchildren catch them. The voiceover says that old memories are like old songs – no matter how much you listen to them, you are never satisfied. The scene changes to a holiday where the family with the old couple are playing cricket and celebrating. The voiceover continues that Club Mahindra has given us the chance to do an action replay of our old memories.

The final TVC, ‘Kathakali’, starts with a couple sneaking out to steal some time together under the rain. The voiceover declares that romantic moments are like first rains, where no matter how much you get drenched, it doesn't seem enough. The scene changes to a holiday dinner where the lady awaits her husband while a Kathakali performance takes place in front of her. One of the dancers is later revealed to be her husband in disguise, as the voiceover says that Club Mahindra has given us several moments that are romantic.

“The current commercial that we have released for Club Mahindra is with the clear objective of presenting the new face of the brand which is manifested in the new identity and the credo ‘Making Every Moment Magical’. Club Mahindra wishes to be the repository of all magical moments that bring families together and the television commercials attempt to illustrate that concept,” pointed out Anil Nair, CEO & Managing Partner, Law & Kenneth.