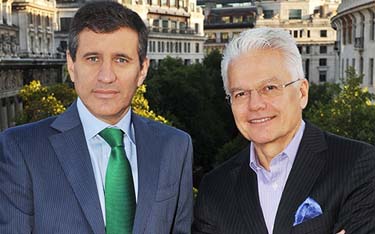 Martinez will assume the role of Worldwide CEO in 2015 at which time Jeffrey will become non-executive chairman. He moves from McCann Worldgroup

Bob Jeffrey, Worldwide Chairman and CEO, JWT, announced on Tuesday in New York that Gustavo Martinez has been appointed Global President and future successor to Jeffrey. Martinez will join JWT in February 2014 and report to Jeffrey. All global discipline leads and region leads will report directly to Martinez. Jeffrey will continue as Worldwide CEO through 2014. Martinez will assume the role of Worldwide CEO in 2015 at which time Jeffrey will become non-executive chairman.

Martinez is a native of Argentina, but grew up primarily in Spain. Among the countries in which he has lived and worked are the United States, Canada, Switzerland, Portugal and Italy. He holds a Ph.D. in Economics from the Universidad de Barcelona, a PDG from IESE (Universidad de Navarra), and has taught Marketing and Economics in Spain’s School of Economics. He speaks Spanish, English, Italian and Portuguese fluently.

“Over the past few years Gustavo and I have cultivated a relationship of mutual admiration and respect. He is passionate about the business, devoted to clients and understands that the key asset of the business is the caring, nurturing and understanding of its people. Gustavo Martinez is the future of JWT,” stated Jeffrey.

“I have had the honour of leading JWT for 15 years, the last 10 of them as Worldwide CEO,” stated Jeffrey. “I love JWT – the brands, the clients and most importantly, the people. Throughout 2014, Gustavo and I will work very closely together to guarantee that we continue to provide the very best support to our clients and the agency, and to ensure a seamless transition in 2015.”